As a boy of a bout 9 or 10, I used to often accompany my mother to her weekday workplace of Worker's Bank (now defunct) on Tower Street, named, I'm guessing, for the towers of the infamous prison at the eastern end.
Whilst I had little interest in the intricacies of commercial banking, I cherished these trips for exposing the heart of the capital city, and in particular, the waterfront area, as fine an example of a port city as exists in this hemisphere.
Even then, 40 years ago, there was repeated talk about expansion and renewal of the city, of making it into an even greater urban centre - of rehabilitating the blighted settlements ringing the city centre to the north, east and west. Of expanding the harbour, of fostering culture an entertainment.
Four decades, and several political regimes later, there is again talk from Government about "renewal" and the usual committees have been formed, and there was news just this week of a "point man" of sorts to oversee this latest round of toing and froing.
This latest iteration of renewal has seen Cabinet approve the expansion of the downtown Kingston Urban Renewal project to boost investment in the area.
Daryl Vaz, Minister with responsibility for Investment, says the expanded development area will include sections of Kingston and Port Royal.
Yeaahhh.....right. I could do a whole other article on the many grand plans to capitalize on the undeniably rich history of the former pirate capital, but with Disney already way ahead of us on that score, and also four "Pirates of the Caribbean" already funnelling revenues from the Port Royal story into foreign hands (a fifth is reportedly due next year), I may be forgiven for not being too hopeful on that score.
What is being heavily touted on this go-round is something called the Urban Renewal Tax Incentive Programme. Under this (latest) proposal, investors will benefit from urban renewal bonds, investment tax credit, tax parental income and exemption from transferred tax and stamp duty among other things


In the official spiel, The Tax Incentive Programme for Urban Renewal was first introduced to downtown Kingston in 1995 and was subsequently extended to Port Royal in 1996, Montego Bay in 2000 and Spanish Town in 2008.
The Tax Incentive Programme is managed by the UDC, on behalf of the Ministry of Finance and the Public Service and aims to garner the support of the private sector in arresting urban decay by encouraging the redevelopment of property in blighted areas.
The programme accomplishes this by enabling persons who either own or lease property in areas defined as special development areas to access incentives to redevelop the properties under the Urban Renewal (Tax Relief) Act which was established in 1995. A special development area is one which is declared by the minister responsible for urban development for the purpose of urban renewal.
Under the Tax Incentive Programme, tax relief is offered to companies or individuals undertaking capital investments in either land or buildings.  These can be residential or commercial holdings. Tax Incentives are offered to both owners and lessees of property in the Special Development Areas.
The four incentives offered are Urban Renewal Bonds, Investment Tax Credit, Tax Free Rental Income and Exemption from Transfer Tax. Organizations such as GraceKennedy Limited, Guardsman Group, NEM Insurance Company Ltd and Courts are among beneficiaries of this programme
The Government is also dreaming of a return of cruise shipping to Kingston, in the manner that presently obtains forthe ports of Montego Bay, Ocho Rios and Falmouth. This, the PM and the developmment Minister say,  involves the construction of a cruise ship pier and a dramatic revitalisation and restoration of Kingston's downtown and harbour front areas, along with existing places of interest.

Well, if the kind of work that has been done, and is continuing, in Falmouth could be replicated in Kingston, then i would - notwithstanding environmental and sociological concerns, be among the first to cheer.

But much of the Jamaican Government modus operandi (both Parties) over te past 40 years or so  leaves me less than optimistic.

For instance, it remains impossible to have the streets of downtown Kingston kept in any semblance of order, much less attractiveness. I'm not expecting them to be pristine, but the truly anarchic sprawl of   economically desperate coupled with the outcomes of official neglect - effluent sewage, uncollected garbage, blighted landmarks - is gonna require far more than  grand pronouncements. 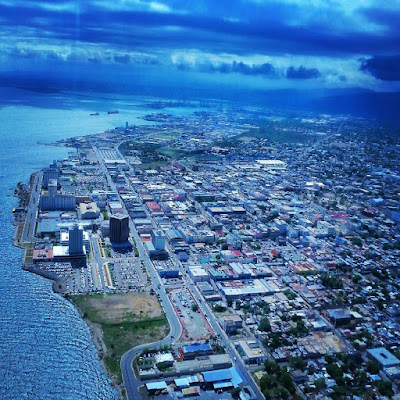 The preservation and restoration of national heritage sites such as the Ward Theatre, for example, is urgent, more so now that the gleaming PetroCaribe-funded Bolivar Centre stands almost right nextto it in mocking splendour.

the area in front of the once great theatre is now an informal depot for route taxis and, yes, staging area for individuals selling everything from snacks to basic school supplies to bootleg DVDs to weed.

One of the great city centres and portsides arguably in the world, and certainly in this hemisphere, remains essentiall untamed.

this is partly (you might, depending on your perspective, say largely or entirely) due to the complex and even confusing divisions and overlaps that have been allowed to spring up and fester by uncaring politicians on both sides in their unbridled lust for power. Today, while those "borderlines" and greay areas are not enforced with the quasi-military intensity of the 70s and 80s, they still work against one of the key ingredients of successful urban renewal: standardization.

Each new "plan"   -  Former World Bank country representative, Giorgio Valentini, highlighted in July 2014 that "there are 10 or 15 different plans" which have all "been done in isolation" - arrives with its own baggage of myopia in deference to undrawn but implicit power lines. Until we decode and get past this legacy, then we'll easy slip through another 40 or 50- year time warp with nothing fundamentally changing

One of the things I'd like to see Kingston renewal plans really take into account (no patronising) is what UNESCO has recognised by designating the capital as one of 10 Creative Cities for Music. The designation, made late last year, is long over sue recognition for the symbiotic relationship between the city and its sounds - sounds which now reverberate across the globe.

When we truly give music and the creative arts - all of them - pride of place in the schematic of redevelopment, only then will Kingston truly come to life and attract global interest. This has already been proven on a smaller but no less impressive scale by the courageous work of the Kingston On the Edge (KOTE) conceptualisers. the annual festival has, against the odds, deftly showcased the nuanced riches of the city and drawn growing international attention.

if there was a KOTE every week or or even every month then, trust me, the rest of the officialand economic master plan would be a proverbial snap; visitors would flock, investors would eaglerly sniff and global media would come trotting in eager to capture, explore and share 9albeit not in equal proportion) .

This is obvious to every person who's ever gone to Rae Town, marvelled at the Roktowa and other creative stands during KOTE, or even massed at Half way Tree or Parade (downtown square) to witness our track athletes best the world during the Olympics or World Championships. Simply, Kingston is more than the waterfront and the few stratified and overrun city blocks - it is Dub Club on the precipice of Skyline Drive every bit as much as it is the National Gallery auditorium on last Sundays or the Edna Manley College Amphitheatre every last Tuesday for Poetry Jam.

These are the assets  that Governments have thus far grossly undervalued. But i for one, remain stubbornly (defiantly?) optimistic that the pace of change will move from glacial to something more discernible.

i can think no more apt final point for this piece than the words of the late journalist Jane Jacobs who wrote in  The Death and Life of Great American Cities (1961): "Cities have the capability of providing something for everybody, only because, and only when, they are created by everybody"

Let's come together around that guidepost, can we?
Posted by Michael A. D. Edwards at 2:44 PM