"Pride goeth before a fall"

Hubris. its the moment when, after prolonged denial and deprivation and struggle, you suddenly find that everything is going your way, everyone seems to love you or think you're "the greatest" and you're at the top of the world. the moment of supreme triumph is also the moment of greatest danger.

That notion is superbly illustrated in this admirable teen "thriller" from co-writer director Josh Trank. The film opens with the viewfinder of a video camera, and that initial narrow angle - expanded to reveal the advancement of the plot becomes a leit-motif for the entire film.

Andrew (Dane DeHann) the one holding the aforementioned camera, is in a box. His mother is dying, and his father, a Seattle firefighter choosing to sit on an injury disability, is abusive and suspicious. his cousin Matt (Alex Russell) is a "classics-quoting" philosophy/psychology student trying to make the adjustment from high school to impending adult life and to come to grips with his feelings for a young co-ed (Ashley Hinshaw), who as it turns out, is also in the habit of recording most of her life's event s on video cam. Steve (Michael B Jordan) is the class socialite and aspiring politician. 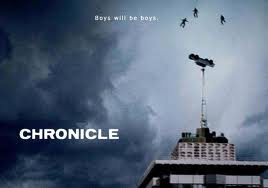 While at a party (where else?), they go off to explore a mysterious cave, a journey which turns up a strange crystalline substance, the contact with which imparts to them the power to bend and move objects and, not unexpectedly, to fly.its this last power, discovered about halfway through this brisk (less than 90 minutes) movie that puts them, literally, on top of the world.

And where the film takes a decidely dark turn, as each of three, now bonded by their newfound abilities, must also now reconcile them with their respective realities. When Andrew, resisting one of his father's onslaughts, say "I could crush you!" only the audience knows just how true this assertion is, and similarly, when Matt says to Casey, "I'm different now" she has little clue as to the extent of that  change.

Also, like any newfound wealth, their powers soon amplify the worst aspects of their personalities, and the bond between them - especially on Andrew's side - begin to rapidly unravel. Here, in taking this conflict past its logical extreme, the film also loses a bit of its footing, but recovers enough so that, by the end, we can see it as more than just a mash-up of Tales From the Crypt, Blair Witch Project and that other teen superpower movie, I Am Number Four.

It may be shorter, but it shows a lot more, and to better effect.
Posted by Michael A. D. Edwards at 12:04 PM