There was that niggling feeling - through all of Viola Davis' triumphant appearances in the run-up to the Academy awards - The Globes, the SAG awards.

Even as the evening progressed, with minor surprises, and the audience - inside the theater and around the world - was settled in for the "official coronation" of the new Best Actress in the World - at least the world of major Hollywood productions. 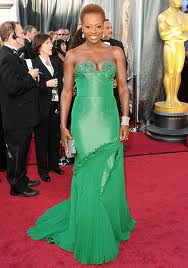 Well, apparently, no one told the academy members that. In a film not honoured in any other category (save make-up), and with some critics even saying that Streep's turn as Britain's iconic former Prime Minister (who, ironically, was in power when Streep last won) was accurate but too studied.

And the greater irony, for Davis to lose to Meryl Streep - who breaks a 30-year drought, and whom Davis starred alongside in "Doubt."

Elsewhere, the night proved an uneven split between the two cinematic love letters - "The Artist" with its monochrome silence, and "Hugo" , Scorcese's riotous yet velveteen tribute to pioneer George Mellies. Each ended, with five, but The Artist took the marquee honours, while Hugo largely had to settle for technical achievements.
Posted by Michael A. D. Edwards at 6:51 AM