The Girl From Naked Eye

So, its a Saturday night (we just picked that one randomly), you're home, you're bored with trolling and tweeting and haven't found anything new to "like". 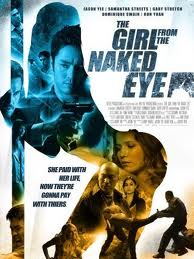 You decide you're in the mood for a movie, but nothing too "heavy"; sure, you want some action, a couple of good, hyperkinetic fight scenes, some gunplay, a little T & A, you know...the usual.But not too much in the way of "story' no brain-twisting conundrums, no slowly unfurling relationship complications, no Byzantine revenge and political schemes. Just a "regular" guy, with a taste for the seamy side, but who's gotten himself in debt to the wrong kinda people and who has lost his taste for the fast lane.

And just to spice things up, you can throw in a not-so-innocent young girl, still in her teens, with long-shelved dreams of becoming a poet, and now content to offer herself to all manner of losers who just happen to have money to pay for her favours. Stir in a ruthlessly crooked cop and a somewhat principled nightclub/escort service owner, set somewhere in contemporary L.A. and watch sparks fly.

Martial arts champion Jason Yee takes much of the blame (or the credit (depending on your perspective) for the above, doing triple duties as writer, co-producer and star. he's enlisted some obscure but strangely likeable talent to help him deliver this potboiler, but none more winningly than Ron Yuan, as the bald-headed club owner, pimp and wanna-be gangster mentioned above. The interplay Yuan and Yee, particularly in a near humourous initial conflict that features one of the "girls" as a hapless (but vociferous) third wheel, almost lifts the movie.

But Girl From Naked Eye still bears too much of the modern B-movie funk to be more than just a throwaway. it doesn't wear out its welcome, but like a burger from a late-night greasy spoon, you won't miss it after its gone through your system.
Posted by Michael A. D. Edwards at 12:54 PM