A kind of "mid-voltage all-star cast" with the likes of Ethan Hawke, Gabriel Byrne, John Leguizamo, JA Rule, Bryan Dennehy and Laurence Fishburne playing various roles, this remake of the Kurt Russell-John Carpenter collaboration is not a game changer but it doesn't wear out its welcome.

Credit for that goes to the cast and to director Jean-Francois Richet (who would subsequently pilot Vincent Cassel to global superstardom as the gangster Mesrine. For a Parisian, he and his production crew do a pretty good job of presenting the post-Industrial gloom of Detroit on New Year's Eve, but one supposes that post-Industrial gloom is largely same wherever in the world one finds it. 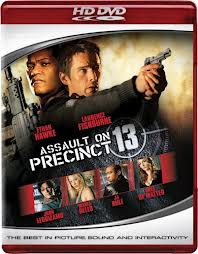 For those unfamiliar with the original, Sgt Jake Roenick (Hawke) is the classic anti-hero cop; he took the rap for an undercover narcotics bust gone bad that resulted in the loss of a colleague and is now just marking time. Judgement is close at hand as the precinct office is set to be closed come Jan. 1, but "hell" arrives early in the form one Marcus Bishop, (Fishburne), the local crime boss, whose police transport is forced to stop at the unlucky-numbered precinct by persistently bad weather. said transport is also carrying a mini rogues' gallery of violent but petty criminals and one certifiable sociopath (Leguizamo, ultimately wasted), who are themselves none too happy about spending the night in company of Roenick and his fellow cops.

The ante is upped - violently - by a cabal of corrupt officers (led by Gabriel Byrne) who are intent on rubbing Bishop out in order to stop him from testifying and thus overturning their own cozy criminal empire. This new development forces an "unrighteous" but unavoidable alliance between jailers and the jailed as Roenick finds himself  again confronted by the things he has long sought to avoid: leadership and responsibility for the lives of others

Standard issue stuff, and truthfully, this remake does at time suffer from standard-issue and sub-standard dialogue. It makes up for it quite handsomely in the action and the characterizations, especially Hawke and Fishburne, who steadfastly take their characters out of the realm of cliche into solid believability. Hawke, who had something of a cop phase going(between this movie, "Training Day" and then "Brooklyn's Finest") has the audience (okay, me) rooting for and cussing him out with equal intensity, while Fishburne achieves a deft balance of pragmatism, pathos, poetics and sheer menace that one is almost sad to see him go (no spoiler intended; watch the end)

Whether or not you liked the original, this update (now itself seven years into history) is worth a look for its finely shaded but otherwise almost unrelenting darkness.
Posted by Michael A. D. Edwards at 8:38 AM