Its not that often used, but it is growing - the penchant of  directors to use children and a seemingly playful and innocent setting to bring over some hard truths about grown-up life in the modern world. We've seen it with Mark Hermon's The Boy in the Striped Pajamas, and now Cuban director has used the ploy to equally engaging effect in this deceptively congenial film. 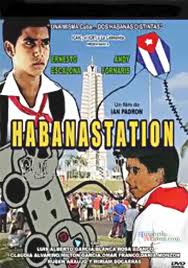 Ernesto Escalona and Andy Fornanis are Mayito and Carlito, two pre-teens growing up in a post-Revolutionary Cuba that is both more and less fervent about its stature than it was when Fidel was the active ruler. The pioneers are still revered and the doctrine is still instilled, but now there's TV magazine coverage of the MayDay observances - the revolution is definitely televised.

But more, there are are class divisions in this 21st century Habana - Mayito, whose father makes a comfortable and travel-filled living as a jazz musician, is chauffered to school (in a Hyundai) and boasts of having the "ultimate" PlayStation 3 game console (from which the film partly derives its title).

Carlos, on the other hand, lives in the Revolutionary equivalent of the ghetto, where dysfunctional payphones stand useless on street corners, and music and trash are equally abundant. In the care of his abuela (grandma) while his Dad serves a jail term, he is rough-and-tumble and street smart where his new friend, who accidentally gets lost in the neighbourhood after the said MayDay parade, is refined and naive.

Of course, the two bond through several seri-comic experiences, one of which involves facing up to a local lgang of bullies. In the meantime, Mayito's overprotective mother and his caring teacher are, along with Dad, mounting a frantic search for their son.

No question, the film is heartwarming, but Padron's deft touch makes both the sentiment and the steely edge easy to swallow. Of course, this being a Cuban production, there is music liberally sprinkled throughout, as well as a good dose of Latin fatalism.

It all adds up to a good time, but one from which the sterner lessons are not forgotten after the show is over.
Posted by Michael A. D. Edwards at 7:30 PM