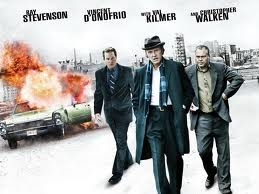 when the "good" bad guys lived honorably, distributed the spoils evenly and dispensed justice according to their own code; the "bad" bad guys got whatever shitstorm that was coming to them.

Of course, it never was as cut-and-dried as that and director/co-writer Johnathan Hensleigh makes sure that the (true) story unfolds in as organic a manner as possible, adapting the book, written by Ray Porrello, detailing the violent succession wars that eventually demolished(?) the Cleveland Mafia.

At the centre of that particular maelstrom is the charismatic Danny Greene (Ray Stevenson, from "The Punisher") who, along with his boyhood pal Joe,  took plenty of his own hard knocks as a kid in Sicilian-controlled Cleveland. Time passes and the pair's paths diverge - Danny heads for the docks, Joe joins the cops - thus setting up a decidedly uneasy yet respectful "understanding" between them.

Through his combination of toughness, brains, a sense of fairness and a penchant for immediately following his instincts, Danny rises to assume control of the local Longshoremen's Union, and thus earns the attention of the mafia hierarchy. Race issues aside, its obvious that such a bright spark in possession of a mind of his own cannot be tolerated and thus comes the edict that forms the title of this film (It was also released as "Bulletproof Gangster").

Danny proves so resistant to guns and bombs that he becomes a figure of national attention. The New York families, who exercise control by proxy over Cleveland, step in and send in their mystery man from the West (confused?) to shadow Danny and rub him out.

The result is inevitable, but its Green's heroic stand  - a noble gangster - and the befuddling and irritiating effect of his durability on his enemies that enlivens the film. There's significant help from the supporting cast, notably Val Kilmer as the adult Joe, Christopher Walken as a mentor-turned-enemy and Vincent D'Onofrio as one of the No. 2 mafiosi who is in fact sympathetic to Danny's cause.

Needless to say, the violence and profanity are rampant, and there are a few brief scenes of partial nudity. But Kill The Irishman is generally a great guy's movie. Load up on the snacks an beverages, kick back in your favourite chair and enjoy a good tale writ large.
Posted by Michael A. D. Edwards at 9:34 AM