The scheduling wasn't her doing, but Jamaican filmaker Rozanne Vereen managed to pull off a neat little save during the recent re-run of the 2013 Short Film Festival, which had its initial run as part of the Kingston on the Edge (KOTE) arts fest. This time around, convenor David Morrison ran the films as part of his regular Friday night slate at the Liguanea Club.

Perhaps driven by a need to get the "dross" out first, the evening began with two gleefully campy flops, both written directed and funded by US expatriate Michael "Keyboard Money Mike" Williams. The latter, a cheap (and cheap-looking) Terminator spoof, preceded by a slightly more substantial but still shoddy story about a down-on-his-luck janitor who decides to impersonate his record company boss for kicks.
The came Vereen's work, a cut (above from the get-go, with its atmospheric opening and general air of mystery. Titled '?' — a single question mark - and set in Paris(?), it begins with the aftermath of lovemaking. The man receives a call urgently summoning him to a meeting or assignment of which we are given no details.

he searches for a particular address, and on the way is intercepted and  assaulted, we assume by a group of men. The scene only suggests that the assault may have been sexual, a suggestion strengthened by the man's rapidly deteriorating mental state and paranoia in the aftermath. His hapless wife, unable to cope with these mysterious changes, and unable to extract any details, takes the obvious route of separation, but their troubles do not end there.

The film is full of uncertainty and has no conventional resolution. But critically, Vereen presents the story to the viewer without seeking to accommodate, a great credit to her narrative and visual skills. The audiences sees the tense exchanges between husband and wife, matched with his direct physical retreat (blocking out all light, refusing sexual advances) as the internal pressure mounts. There is the inevitable impulse to wonder why he chooses not to speak out, even to one whom he is supposed to trust. It subtly speaks volumes about the state of the relationship prior to the incident, but the director gives us no easy answers.

All in all, a very engaging effort, one we hope will be expanded into feature length. 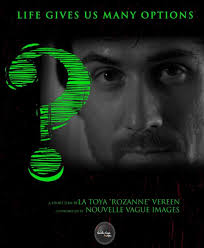