Get Lucky: All's Fair in Love and Crime

Thieves who steal from thieves. Love and romance - of a fashion - amongst the gritty London underworld. Car chases, boat chases, beat-ups, close calls and shodowns in abandoned lots. They're familiar calling cards but in this plucky, if somewhat demanding little thriller, they don't lose much for all their familiarity.

Lucky is a small time criminal and he's happy just getting by until he agrees to look after some counterfeit money for a friend who is in a bit of trouble with the law Two months go by without a word from him so Lucky burns the 'funny money' to avoid problems for himself. The resulting fire means a trip to the emergency room where he meets Bridget and his charm has her agreeing to go out with him. Their date goes well until the end when two hoods bundle him into the back of their car. It appea 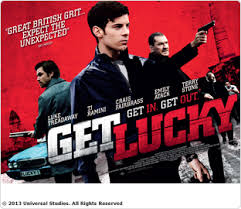 rs that they had bought the 'funny money' from Lucky's friend and they want it back - all £150,000 or Lucky will end up like his friend. Lucky needs to score big so he teams up with an old mate who is planning a big casino heist with a couple of other gangsters who's day job is collecting protection money for 'Mr Big'. The are looking to earn a bit of money 'on the side'. The heist goes almost according to plan but with one small problem - there's minimal cash and the rest is in bonds. It all starts to go wrong immediately. A prostitute who they have hired steals the bonds and the getaway car is stolen. Worse is yet to come. The two gangsters have not done their homework and they've actually just robbed 'Mr Big's casino. Their only chance to avoid their boss's severe retribution is to get the stuff back.

Director Sacha Bennett works the script (by the accomplished TJ Ramini and Walter Taylaur) with appreciable gusto, and whilst the acting is decidedly uneven, diminutive lead Luke Treadway as Lucky and a several of the "bit players" stand out in their respective spaces in the plot.

If you're not that used to the dialogue, this film may take a second screening to get used to but, its worth it if you like fast-paced action, spiced with a little sex (including a humourous incident involving a prostitute and one of the robbers).

In other words, its the perfect candidate for Testosterone Theatre. Sit back and dig in.
Posted by Michael A. D. Edwards at 9:24 AM