Brands: Its Another "Dream Weekend" for Ting 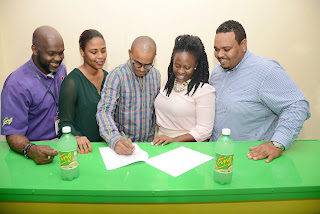 The deal sees Ting being one of the exclusive non-alcoholic beverages offered by Pepsi Cola to the approximated 30,000 local and international patrons expected to attend the week-long getaway from July 28 to August 1 on the shores of Negril.

“Ting has partnered with Dream Entertainment on this sponsorship from inception in 2009 and we are excited to be on board again. Both entities have successfully cemented their footprints as authentic Jamaican brands that people both locally and in the diaspora love,” he said.
Scott Dunn, Dream Entertainment Managing Director shared similar sentiments on the partnership.
“Ting is one of Dream Weekend’s best partners. Ting is famed locally and abroad for being an unrivalled chaser to mix with a wide range of spirits and adding a refreshing new dimension to cocktails,” he said. “Dream Weekend is keen on offering a true Jamaican experience to all our patrons therefore is it befitting that we have a true Jamaican product on board.”