Muisc: Ju-Ju [Marley] hits the road in the UK this summer 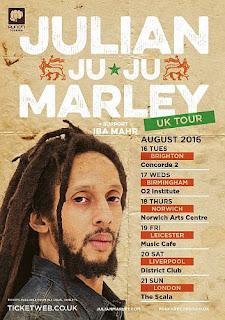 Punch touring is bringing the internationally acclaimed roots reggae superstar Julian Ju Ju Marley to the UK THIS August for his first nationwide tour. Grammy nominated Marley will play hits like Boom Draw, Systems, Lemme Go and violence in the streets, complete with his full band and support from Jamaican roots artist Iba Mahr.
Julian is the son of international music legend Bob Marley and along with brothers, Ziggy, Stephen and Damian he has continued his fathers legacy with quality music and energetic live shows which has seen the message of reggae being pushed to the four corners of the world.
Punch CEO Ammo Talwar MBE says “Julian Marley has many modern musical influences, but has in his heart the authentic roots reggae sound that his father made world famous. This will be an unmissable tour for fans of conscious reggae and those wanting to see real reggae royalty live on stage.
Posted by Michael A. D. Edwards at 10:46 AM