Brands: with #EnjoyResponiblyJa, Red Stripe Doubles Down on restricting youth access to alcohol 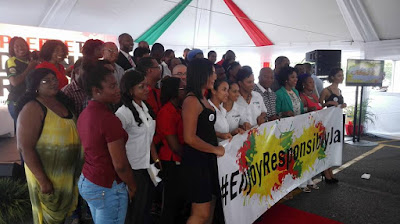 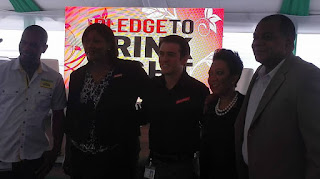 Iconic beer brand Red Stripe has been in media overdrive of late, what with returnign its production facilities tothe famed Spanish Town Road plant, and taking on additional employees in advance of a renewed export push under new owners Heineken.
That continued yesterday, but this time, the focus was on restricting access to beer and other alcoholic beverages to minors (the drinking age and voting ages coincide at 18; the age of consent is still 16). The company, in recognition of the parent Heineken's Enjoy Responsibly Day, observed globally, relaunched its I Pledge To Drink Right and the We ID campaigns under the #EnjoyResponsiblyJa banner.

There were expressionso f support and well-wishing from retail partners, including hosts Boulevard Sovereign Centre (formerly Michi) and Bashco/megamart and petrol retailer Rubis, whose convenience stores are a major access point for alcoholic beverages.

There was also, as expected, a sobering note from the National Council on Drug Abuse, whose Exec Director michael Tucker pointed out that that teen access to booze remains rampant, even as he wholeheartedly commended RedStripe and the "rum People" J Wray and Nephew, repped o nthe occasion by Gary Dixon.

By events end, there was much levity anda stirring performance by Drink Right Ambassador Iab Mahr, the perfect prelude to a group photo behind the #EnjoyResponsiblyJa banner and some cocktails - all kept within the theme of the Day, meaning water, fruit punch and Malta rather than the world-class, world-famous brew.
Cheers!
Posted by Michael A. D. Edwards at 11:30 AM