Culture: "Do As I....." Etana's reveal and what it says about the artist's responsibility

"My music is not my beliefs" 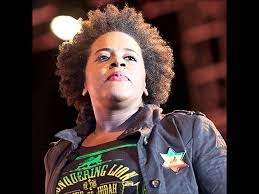 Singer Etana has placed herself in a really uncomfortable position when, on being quizzed by "Entertainment Report" host Anthony Miller, she revealed  that not only does she admire and support polarizing US Presidential candidate Donald Trump, but placed such support above an beyod the populistic lyrics for which she has become known

Her political leanings, whether for US or Jamaican politicians is almost irrelevant. Hilary Clinton is a less-than-ideal 2nd-time contender for the White House, with significant unpacked baggage, but she is not the under-informed fascist that Donald trump clearly is. A Trump win has potentially massive downside for US-Caribbean relations, and for Jamaica in particular.

So Etana's declaration of support for Donald trump, while problematic and even offensive to some, does not, in my view, have the power in itself to seriously diminish her standing as an artist.

The remark uttered by her at the top of this essay is, however, a very different matter.

There are some positions I wish for people to consider

An artist, a creative individual (or group) has a different level of engagement with the society than others. yes, the arts have a business and a professional side to them, moreso in today's world. Yet, with all of that said, the artist and the community are partners in a trust.

Trust. The audience - whether visually or otherwise - have expectations that they want fulfilled, and so too does the artist. The artist may create the work on his/her own, but draws for the community in terms of themes and ideas. Similarly, the community gives its support to the artist by choice, but depends, often unwittingly, on the creator to sow them something of themselves , whether it be uplifting, uncomfortable, but undeniable.

in short, the truth plays a significant role in the dynamic between artist and public.even parodists, Like Weird Al Yankovic and our own Lovindeer, are using the medium to express certain views on topics or figures that are apparently " hot" for the masses - be it losing weight ("Eat It") or the installation of nude statues in a public park ("Happ-iness in de Park"). satire, fable and allegory are all acceptable and important elements in getting certain truths across.

What cannot be acceptable is for the artist to dismiss the positions articulated in her work - the way that Etana has done - because the values espouse are irreconcilable with her political or other choices (religious, etc). it would be one thing for Etana to say that she truly believes trump will effect social justice, and opportunities for upward mobility for all in the US, as unlikely as those developments may seem to the rest of us.

But to regard the sentiments expressed in such songs as "Roots" "Not Afraid" and "Better Tomorrow" as disconnected from her personal beliefs (whether she penned the lyrics or not) simply because her professed support of Donald Trump is incongruous with the values of those songs does a huge disservice to her audience, the worldwide fan base she has built over the course of four albums and many live appearances. Drawn to the poignancy and the general uplift behind such words as "I am not Afraid/ If dem a come/ mek dem come/ Coz I'm protected/ by the Most High One".

Does she no longer hold the above to be true? Did she ever believe it in the first place? is her music career a purely mercenary exercise, driven bey the overarching need to secure her own welfare? Will she sing nay lyric to gain the trust of the public, only to disavow it under the heat and glare of media scrutiny (good job, by the way, Anthony Miller)?

These are questions that she and other creatives need to consider. Does my work -whether solo or collaborative - speak for me? is there room for divergence between what I offer to the public and my inner core?

My answer to this last one is "No" and, from the immediate social media backlash - powerful enough to force the singer into an unconvincing explanation of her position (the cliched "My words were twisted"), its clearly many share that view. The public has expectations of those offering them creations, and the main one, good or bad, is credibility.

Etana, I really think you need a total reset here.....for a better tomorrow.