First, I do not often write opinion pieces on Jamaican politics - contending with die-hards of either party seems so often to be a battle with no victors. 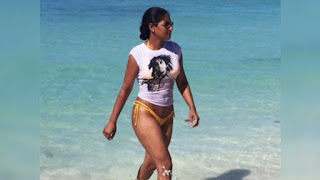 Second, I carry no brief for Lisa Hanna. Apart form the overall sense of narcissism - understandable, given both her present occupation and its antecedents - I believe her tenure as Minister was, at best, a mixed bag, a work-in-progress that does not reflect sufficient progress.

So what, apart from the fact of the impending PNP Leadership race, would have led me  to put this together?

Specifically, an article in the Jamaica Observer of Sunday Sep 11, titled "Lisa's Tough Climb". (right). The article details both support for and opposition to Hanna'a candidacy for one of the party's four Vice-Presidential posts.

Actually, it was a quote, attributed to an unnamed "member of the party hierarchy" to the effect that Hanna has not yet "served her apprenticeship" or paid her dues.

even to a rank outsider like myself, that is preposterously offensive.The party, having lost the General elections, and far from certain in the impending(?) Local government poll, is still struggling to digest a report from its own Internal Committee, which examined the reasons for the election defeat. Aside from the party leader's  refusal to participate in national Debates, the disconnect between the party and both the public at large and its own constituents, a disconnect in no small way linked to the perception that the "hierarchy" has outlived its usefulness and should, in the Jamaican parlance, "tek weh itself".

It hasn't, choosing instead to focus on Hanna's (long) prior affiliation with the Jamaica Labour Party and the perceived deficit in dues. This, while making a presumptive winner of sitting VP Fenton Ferguson, an individual who bungled his way through the Health portfolio to a breathtaking degree.

All of which, leads me to a bit of speculation (hallucination, some of you might say). what if Hanna had actually led the party in the last election? What if President Portia Simpson Miller had chosen - in a manner similar to Bruce Golding (albeit under different circumstances) to demit office before the "natural" end of her term an hand over the reins to the younger, more media-savvy and forward-looking candidate.

Would that in and of itself propelled the PNP to victory? Maybe, maybe not. We really can't tell. But we do know this. The PNP lost 9 seats that it held prior to February 25, and a good number of those to first-time political opponents. Would Hanna's "change-minded" agenda have been able to sniff out those shifts and counter a least some of them, enough to see the "party of NW Manley" retain the majority at Gordon House?

I suspect she would, though I submit that she's not the only one who could. The PNP, to its credit, has a number of bright young candidates generating significant goodwill among the populace. Deputy General secretary Julian Robinson is one such, though he arguably lacks the charisma to galvanize the new generation?

As the Observer article indicates, and really, as has been obvious over the last couple of years, Hanna is not universally liked within the Party. But she has organized well enough to retain major seat - a seat the PNP has in fact never lost, regardless of the overall outcome of General Elections She's smart, articulate and yes, easy on the eyes (as the now infamous bikini photo at top reminds us), and ii might be THE critical factor but its still a factor. And, equally important, she's demonstrated that she can stay in the proverbial kitchen and function even when the heat is way up.

Could it be, that just as she did by not debating the Opposition, that Portia Simpson miller missed a major opportunity by a) - mistiming her exit, and b) - not making the kind of radical shift in leadership that Hanna represents. Hanna as President would have changed the entire tenor of the political conversation in this country. And, whereas not ALL  the undoubted foreign media interest would be favourable, it would certainly be substantial: a "Third World' country transitioning from one woman leader to another when Uncle Sam is , even now, having conniptions about putting a woman in for the first time.

So yes, Lisa Hann may well be facing an uphill battle for hearts and minds in the demoralised PNP and yes, she is presently seeking the VP post and not the Presidency. Even assuming she succeeds in her bid at this Conference, with the incumbent as yet unwilling to give up the spotlight, and with other contenders biding their time, the leadership is still some ways away.

But the great luxury of the past (and, to a lesser extent, the present) is the ability to speculate on a  different kind of future - just for a change