Its probably the last place one might expect to see an octet (plus vocalists) in action, but the parking lot of Kingston's Southdale Plaza proved quite conducive to a typically spirited live music session, part of a series dubbed "Jazz in the Street" and spearheaded by Ahmet Osman, proprietor of The Wine Shop that anchors the popular mall (popular coffee bar Suise's sits at the other end). 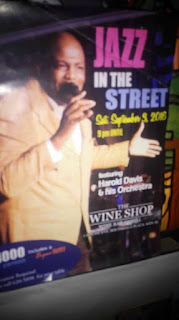 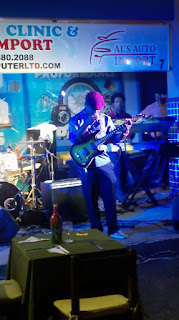 Harold Davis led the aforementioned 8-piece (with guitarist Seretse Small doing double duty as musical director  and he began with suitable respect to the "jazz" in the title with Lerner and Loewe's "Almost Like Being in Love" (popularized by Nat King Cole among others). Thereafter, it was the expected (at least for this writer) but still heartily welcome mixed bag of Jamaican and global standards (including a superior reading of Jobim's "Desafinado", all delivered with Davis' trademark joyous stance - both on vocals and on keyboards, and supported by a crack team of players: Andrew Thompson drums; Paul Madden on bass; Courtney Sinclair on keyboards; Warren Harris on alto sax; Romeo Gray on trombone; Everol Wray on trumpet. Sabrina Nembhard and Thamar Williams provided background vocals andalso presented their own mini-cabarets earlier in the evening. 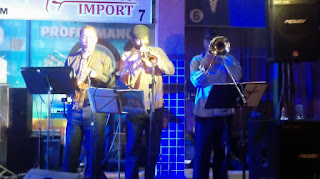 A rousing ska/rocksteady tribute mixed well with Osman's libations to get most of the crowd (and most of them women, in fact) out of their seats and on their feet, a closing suite which segued nicely into a brief medley of American r n' b classics, the latter preceded by a bad joke and the obligatory calls for encore.

By night's end, the audience, though not fully sated, were certainly well-served musically, in compliment to the wine and buffet that Osman and Company intend to form the core of the experience as the series continues.