It often seems that Chris Gayle is tone between actually playing cricket and being a celebrity who plays cricket. 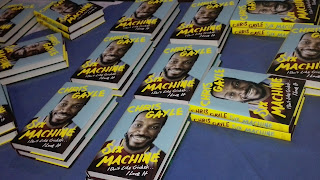 His exploits on the cricket pitch are fast entering the realm of legend, much like that other famous Jamaican athlete, - you know, the guy who runs? But, along the way, just like his track star compatriot, Gayle has had his share of publicity flaps and flops. Arguably, none will live longer in infamy (or maybe now in hashtag-land) than "Don't blush baby" the casual cap to a seemingly awkward attempt to coax Australian TV journalist Mel McLaughlin to join him post-game for dinner and a few drinks, during an on-air interview. 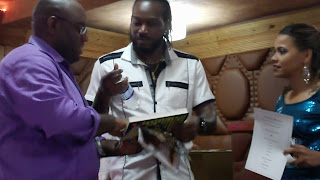 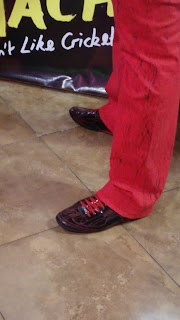 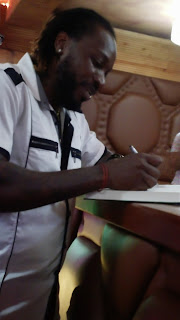 The incident made international headlines beyond the cricketing world and cost Gayle a fairly hefty $10,000 in fines from his local Aussie t20 club, the Renegades.

he has since shrugged off the whole brouhaha (the latest in a line which included him reportedly dropping his towel in a dressing room before another female reporter and boasting about his "big bat").

The West Indies batting star is apparently comfortable to move into another sphere of public life: memoirist. His life tome had its Jamaican launch at the expected place - his Triple Century Sports bar and Grill in the heart of the New Kingston business district.

The title?: "Six Machine" (clearly with apologies to the late James Brown, and the declaratory sub-title, "I Don't Like Cricket...I Love It".

Clearly not as much as having a party - and the man of the hour was suitably outstanding in white wihte shirt with black trim, tomato-red trousers and black shoeswith matching red trim. try ignoring him.

of course media reps ran through the expected raft of interviews and some got their books signed (distributor Novelty Trading, which runs the venerable Bookland store a few doors up the road, was on hand to handle the supply and sales, and patrons hungry for the sports highlights of the day could feat their eyes on the lounges multiple screen - that is, after the big man got through with his presentation.

Gayle, who spenthte summer playing T20 in the UK, among other things, is apparently in recuperation mode at present, but expects to beck on the pitch to put his big bat (and useful spin) into play, what with a number of international cricket engagements on his ever-expanding plate.