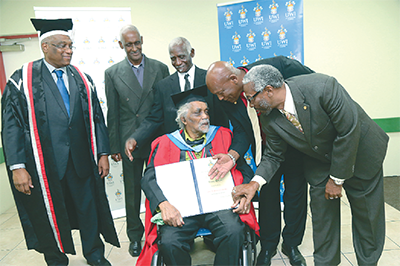 Living steelband icon Anthony Williams was bestowed an Honorary Doctor of Letters (DLitt) from the University of the West Indies on October 22, at the St Augustine Campus of the UWI in Trinidad.
The founder of North Stars Steel Orchestra of St James, the band to win the first Panorama championship back in 1963, and the inventor of the Spider Web pan, Williams has been revered by colleagues and the public for more than half century for his innovations in the national instrument and his unique arrangements on pan.
In 1992, Williams received the Chaconia Medal (Gold) and in 2008, he received the Order of the Republic of T&T, the nation’s highest award. More recently he also received awards from the producers of the St James WeBeat Live and Woodbrook/St James Community Association. 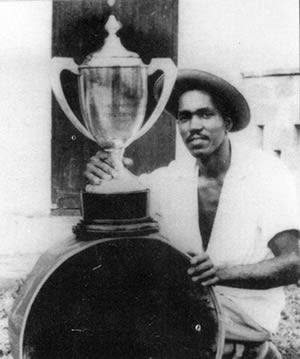 In related news, the management of Caribbean Airlines Invaders Steel Orchestra held true to their word to deliver the Invaders 75th Anniversary Awards to two of the orchestra’s founding members: Elliot “Ellie” Mannette in Osage, West Virginia and Emmanuel “Cobojack” Riley in Brooklyn, New York.
Desiree Myers, music co-ordinator and Michael Dinchong, managing director, travelled to New York courtesy the band’s sponsor, Caribbean Airlines, to make these presentations.
Friends and students of the Mannette Music Instruments Workshop in West Virginia hosted a special reception, where Dinchong presented Mannette with the band’s award in recognition of his historical contribution towards the formation of the legendary Woodbrook steelband. Mannette also received a copy of the Invaders’ history book entitled Invaders Steel Orchestra: The history of a legendary T&T Steelband by Dr Jeannine Remy and Ray Funk.
In his presentation speech, Dinchong remarked that nine years ago the government of T&T declared 147 Tragarete Road, Woodbrook, a national heritage site, and that 147 Tragarete Road has been the untenured home of Invaders since its birth in 1940.
“It was the home of Ellie Mannette and the sacred grounds where many of his inspirations bore fruit under the famous ‘breadfruit tree’,” said Dinchong.  He added: “This declaration in essence immortalises Invaders Steel Orchestra. It also immortalises the name Ellie Mannette.” [. . .]
[Photo above by Andre Alexander: Pan Trinbago president Keith Diaz, second right, and secretary Richard Forteau, right, congratulate Anthony Williams after he was awarded an Honorary Doctor of Letters (DLitt), from the University of the West Indies, at a graduation ceremony hosted by the St Augustine Campus of the UWI on October 22. At left, is Prof Brian Copeland, pro vice-chancellor and campus principal, UWI-St. Augustine.]
Posted by Michael A. D. Edwards at 5:26 AM