That existential question, wrapped in the Psalmist's praise, seems the perfect entry point to the works of artist Richard "Sinista" Natoo. Man, for all his achievements, and promised high spiritual station, pales physically in comparison to the great beasts, such as a 200-ton whale or a mythical, pre-historic crocodile (the present 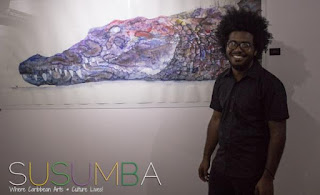 Nile and saltwater varieties, at around 30 feet each, are frightening enough). Indeed, it i only through his mental and metaphysical exhortations - such as the glorious artwork on view - preserved for the public and added to the collective memory, that humans gain any noticeable advantage.

Nattoo’s short run solo exhibition, Lost in the Echo, opened at The Hub on Lady Musgrave Road. last Friday (December 9, 2016) and closed this past  Saturday, (December 17, 2016), continues in that vein adding several mythological references even as he continues to illustrate the physical insignificance of humans relative to our counterparts in the animal kingdom.

This writer first came across the artist Richard Natoo during an arts excursion to Portland courtesy of arts over and resort owner Paul Rhodes. Then, he was an unassuming yet quietly confident art student, whose curiosity about many things was revealed through gradual association.

Natoo's  artistic conception became more fully formed and more publicly evident, over the ensuing years, through his participation in the Kingston On The Edge (KOTE) arts fest, and also the Bienniale of the National Gallery of Jamaica - where his fascination with large creatures such as elephants and whales, was displayed to stunning effect.

He offers that his exquisite creations, often framed in glass, arise from the need to evoke emotions and feelings from the viewer similar to what he experiences in his journey through life. This is not the facile realm of shock or even sensation, but a deeper mix of emotions and thoughtfulness occasioned by the multi-faceted beauty of the work.

Nattoo affirms this key point of introspection coupled with immediate reaction. His is an excursion where the commonly accepted boundaries between the rational and the fantastical have evaporated, where the "echo" of the title may be the sonorous keening of the whale, or the the mental affinity to the otherwise very distant past - the place where legends are commonplace and men and deities co-exist.

The 22 pieces in the collection  are created on archival paper, either rendered with ink, archival ink or watercolour. As a result, the majority are monochromatic with a few striking watercolour pieces splashed between. I like to create work that makes me feel something and hopefully makes my audience feel something,” Nattoo said.


The young artist, a recent graduate of the Caribbean School of Architecture, explained that he began working toward the collection in May, with the intention to produce an exhibition in June.It is part of his intention to offer at least an annual collection, not simply to satisfy mercenary or even egotistical leanings, but rather as guideposts, markers to his personal/artistic development, in many respects an offering of himself to the world.

Perhaps all art is both a search for and an affirmation of,  deeper significance in the face of lingering questions. In the case of this stunning show, the existential question is not fully answered, but rather wondrously and delightfully explored.
Posted by Michael A. D. Edwards at 5:58 AM