Noting its apparent rise in acceptance among younger Jamaicans (and judging from this outing, some older ones too), this writer had not tested the waters at a full-length EDM showcase. 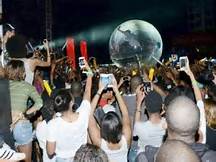 My "baptism of sound and LED" came on Saturday last via the 4th renewal of the Jamaica concert by globe-trotting dance/DJ stars Major Lazer, the dancehall-oriented project of DJ superstar Diplo. Accompanied by "local hero" Walshy Fire, as well as Jillionaire and a bevy of very fetching and talented dancers, the headline act kept patrons rocking, screaming and throwing their hands up - as much to receive the free rags and other doodads tossed out as in support of the entertainment.

Boasting enough total electrical power to illuminate a small neighbourhood (which, in effect, the Stadium east/Mas Camp  complex was for the night), the show offered a surprising and welcome diversity of musical styles, not to mention some cool special appearances, courtesy of Richie Stephens, Sean Paul, Chronixx and Protoje, who each bowed new collabs with the Major Lazer team(Stepehns, and Garnet Silk Jr came on to pay tribute to the latter's legendary late father). So too, did special guest, Jamaican-born, US resident Party Next Door, whose performance frankly, was not the life of the party.

The other DJ teams participating, brought their particular sensibilities, mostly embodied in the hype men (opener Shane Firestarter allowed his selections to do the talking), but they were really just appetizers - the Major Lazer presented a show that satisfied in all aspects - visual, sonic and the intangible, vibes - and could easily have sustained the show on their own - even without the now obligatory "giant clear ball" or the confetti cannons..

An honourable mention goes to the lone female on the roster, The Wizard, whose  self-produced smash "Mash it Up" is still a party staple three years on. Her set started out with a refreshing absence of the rote dance tracks, opting instead for the kind of dense, even murky lines that might commonly be associated with a Skrillex, and gradually transited to more "dance-ready" fare. Like Third Dimension who followed her, Wizard gave ample confirmation that she is ready for her "global close-up" (to borrow a movie industry catch-phrase).

Overall, the Major Lazer experience, loud as it obviously was, and heavy on the presence of skimpily-clad, barely-legal fans, is a first-rate production. It started on time, ended within the acceptable time frame, and has lots to teach indigenous promoters - and acts.