There may not seem much, on the face of it, to inspire optimism from an exhibition that includes examinations of mortality and whose title, the Supreme Interrupter, suggests an unwelcome appearance or development. 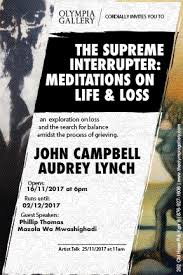 But "The Supreme Interrupter: Meditations on Life and Loss" the collaborative show between artists and contemporaries Audrey Lynch and John Campbell, which opened officially last Thursday and ends an all-too-brief run on Dec 2 (to accommodate a major exhibition of Chinese art)  at Kingston's Olympia Art Gallery is indeed a cause for celebration, and not just because the painters have delivered pieces of great quality.

It is in the clear philosophical content, and the willingness to present their decidedly individual - yet indisputably linked - worldviews that makes this show such a vital light in our present hour of mass conformity.

The two artist, while displaying some differing sensibilities, do have a few common motifs: The tree - stripped bare yet somehow defiantly vibrant - is one such. Its is a far more prominent feature in Lynch's work where it is anthropomorphic, as in the pair "Cosmic Dancer I and II" poised, with spiky arms and legs, by a portal to different dimensions. Campbell's tree is more stark - if no less striking, featured strongly in two pieces of a triplet titled" Legacy"  and somewhat suggested in the other. In "Legacy III" the tree is superimposed on the back of a figure of the artist himself, hat slightly tipped, with the subtitle "One Step At A Time, Pop's Words" a reference to his departed father and that loss, among others, is a large part of  "Interruptions" examined in the theme.

Lynch too, bears this personal anguish, with an image of her departed brother taking up a third of what may her most fascinating piece "Suffer The Little Children" On the opposite side of the painting, two children wander through a landscape of mountain and river, while in the middle is a stylized image of the Crucifix on a type of stained glass window. If any piece in the show sparks varied comment, it should be this one. Elsewhere in her oeuvre, Lynch makes more direct references to the subject matter, with "The Dead Zone" I and II" and "Apathy Ennui and Death/Debt".

Yet, in the midst of death, so to speak, is life, with its varied idiosyncracies and, after all, it is the living who ponder the transition, as Campbell does, in "Searching For The Silver Lining" and "The Bearer". For Campbell, this ability of life to throw up the unexpected (interruptions) is, ironically, cast in a  linear fashion: a red line that appears hard and fast (in all senses of that word) in several pieces. It is notably jagged, however in "Something Seismic" one of the show's standout pieces (and not just because of its unusual width) in which pain and and doubt are etched on the face of a figure in the midst of a grey, cloudy "skyscape" ( a field that is repeated throughout  Campbell's works)

Lynch too, juxtaposes supernatural with the natural, depictions of the ocean "interrupted" by swirling clouds, rectilinear structures (the uninvited imposition of order?) and forms such as the eye. Even the seemingly beatific clearing depicted in radiant green in  "The Underground Forest" is bathed in eerily coloured lights, as if one might expect that, at any moment, monsters (human or otherwise) may appear to disrupt nature's inherent peace.

Indeed, turmoil is the order of the day in this exhibition and, rather than simply recoil from it, the artists have, each in their own way, decided to take it in, take it on and  then allow it out, with the striking results of that process on show for a public that may be looking for expression beyond the superficial - one where both geometric and chromatic elements are distilled in alignment with the artists' visions. Through the prisms of their respective losses, John and Audrey are attempting to make sense of the perceived wider loss, one which she sums up in a poem in the exhibition booklet:

"...We lose our voice
We lose our sense of self
As we push through the head winds
Of commerce and culture
We lose the intuitive and the tender
We lose the ability to insightfully distill experience into
Life lessons"

And so, "The Supreme Interrupter" is really a reminder to keep fighting for those things most worth preserving.
Posted by Michael A. D. Edwards at 4:04 AM