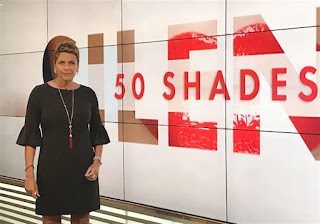 Chisolm has started the aforementioned movement and website of the same name, from which she purportedly is advocating for victims of cyber sexual assault and harassment and is also working on a documentary of her alleged experience, as well as that of other women. The site also solicits contributions to enable "field producers" for the documentary and other causes related to the film and the advocacy in general. In addition, she has made a complaint in civil court in the U.S. about the posted images.

Having seen Chisolm give interviews on several national broadcast media news shows and reading reports on the issue in several publications as well as on the Internet, I sought Mr. X out to get his version of the events. My first question to Mr. X - expectedly - was, "did you post images and a video of Darieth Chislom on the internet?" His answer: No, he did not post any such images or video of Chisolm.

As one may guess, this is NOT your typical “tropical romance gone sour” story. Firstly, according to Chisolm (in her court statement), the two first met in the U.S. when she was 19 and Mr. X about 3 years older, and dated for a few months. After no contact for over two decades, she continues, Mr. X, she says, “searched me out on the Internet and, finding my number, called me in 2015.” After talking and Skyping for a few months “on and off” the two began a relationship again. Later that year, Chisolm moved to Jamaica to be with Mr. X.

Okay, so what, you may ask. After this point, things get, well.....complicated. The relationship that according to Chisolm's statement precipitated her move to Jamaica was in fact, an extramarital one, one of at least two that Chisolm confided to Mr. X had taken place over the course of her 20-year marriage. A divorce from her husband had been obtained prior to her arrival on the island on December 4, 2015, but one of the incidents which accelerated the dissolution of her marriage was her then husband catching her in a rather compromising Skype call with Mr. X on June 26, 2015.

The proverbial stew of the plot thickens further. Chisolm claims, in her statements that she chose to “end the relationship” in April of 2016, claiming that by then Mr. X had become “increasingly controlling and manipulative and didn't want me leaving Jamaica to secure work opportunities in the U.S.” Mr. X provided an exhaustive timeline of her trips to Jamaica, including a visit on June 19 through July 14, 2016 (25 days) that curiously does not feature in any of Chisolm's court statements, print or broadcast media interviews. On all occasions when Chisolm visited, the two lived together, Mr. X states. The timeline also details repeated occasions where the two were together (including datelined pictures of her and Mr. X in Kingston on June 20; in Negril with Mr. X and his family on June 28, 2016). There are also hotel registration slips (Rock House Hotel, Negril - dated July 5-7, 2016) and other documents that clearly bear both their names and signatures. Mr. X has also retained whatsapp messages, text and email records/documents of their exchanges and their personal affairs going back to when they initially reconnected in January 2015.

Regarding Chisolm's stated last trip to “formally end the relationship” (she speaks about it in all her interviews) that task, according to Mr. X's records, strangely took all of 13 days, and actually began a week before Chisolm's stated November date (see Timeline below). And, in case you might be thinking the visit was purely social, they include a one-night stay at the famed Strawberry Hill resort (October 27, 2016) in the Blue Mountains and a weekend stay at the equally renowned Couples Resorts in Ocho Rios (October 29-30, 2016) where at Chisolm's behest, they were hanging out "au naturel," having cocktails in voyeur mode at the resort's nude beach. Mr. X states that to this day, he still has three suitcases of Chisolm's belongings [dresses, shoes and other personal (toys) items]. Sure doesn't sound like someone who was eager to “formally end the relationship.”

Looking at the timeline, it seems clear that Chisolm was NOT, in any way being restricted or manipulated into remaining in Jamaica, nor had any reason to feel fearful of Mr. X or being in his company, contrary to the claim she makes in her statements and interviews. According to Mr. X, there was a mutual understanding between them that Chisolm would come and go as she pleased, given that, as she told Mr. X, Jamaica was largely a place where she could “release her inhibitions” in a manner that she would not normally do in the U.S. or while she was with her husband.

But it goes even further. In March 2016, he says he learned that he had contracted the herpes virus from Chisolm. Confronting her about it, he was first met with denials and lies. He says she eventually told him “she had known about her condition for over 20 years, but had not bothered to tell me about it because her husband had not gotten the virus.” It is interesting to note that this incident is NOWHERE mentioned (like the cover-up of the 25 days visit) in Chisolm's statements or media interviews, even though, according to Mr. X, it is THE incident, the proverbial final straw that led to huge arguments and the deterioration of the relationship. Prior to that, Mr. X says, Chisolm on several occasions, when returning to Jamaica, gave him other STIs, for which he obtained prescription treatment for himself, and - one occasion - for them both at her request.

But don't sign off yet, there's still a few more details that Chisolm has not bothered to address in her media campaign. The two shared a townhouse in St. Ann, on Jamaica’s North Coast, (alluded to but not specifically stated by Chisolm) on a joint (50-50) lease basis from December 2015 to December 2016 - meaning that Chisolm's name was also on the lease and she was jointly obligated in that regard. In May of 2016, Mr. X says Chisolm stopped fulfilling her obligations on the townhouse with 8 months remaining on the lease, (despite subsequently returning to be with him after that point). This action, which Mr. X points out left him in a considerable financial bind, naturally also contributed to the conflict.

Secondly, according to Chisolm's court statement, she and her attorney allege that Mr. X was arrested in the U.S. Virgin Islands in 2011, trying to elude Jamaican authorities and U.S. immigrations agents. "False." Documents obtained by this writer show clearly that while the person named in her injunction shares a first and last name with Mr. X, the middle name is totally different AND the individual is 14 years younger. This, Mr. X, says, is another underhanded attempt to make him out to be a menace in the eyes of the U.S authorities, Jamaican authorities, immigration authorities, U.S. court, the general public and her social media followers, in order to ensure that he would (in Chisolm's own words) “never be allowed back in the States again”

Most importantly, Mr. X, insists, is that Chisolm's behaviour with him while they were together is totally inconsistent with - even directly opposite to - the chaste, demure, aggrieved virtuous professional that she has sought to portray in her media appearances. To the point, he says, Chisolm has insisted in her interviews that she had “no prior knowledge” of his checkered past. This, he says, "is a blatant lie, she knew that I was deported and also the reason why." He relates her saying the following to him, in sober and drunken states, in spoken conversations as well as texts (whatsapp: June 22, 2015): “I prefer bad boys, because I'm a round the way girl, down for anything, ride or die bitch.”

In addition to the fact of her divorce and her extra-marital affairs, Mr. X states that Chisolm ("an exhibitionist while on the island") was given to demanding sex in public spaces. This includes on several public beaches - Doctor's Cave, Runaway Bay and Boston Beach - and on the balcony of the Gloucestershire Hotel Montego Bay (August 2-3, 2015). On one of those beach escapades, they were scolded by lifeguards, and on the hotel balcony, they were fully visible from the busy street (Mobay's Hip Strip) below, while also knowingly being watched by hotel attendants. Chisolm also frequently demanded that Mr. X have marijuana available for her on her visits and repeatedly smoked it in public. These actions, he contends, “are not the work of a victim, and definitely are not in agreement with her assertion that the images being referred to were taken without her express consent and willing participation.” According to Mr. X, he has witnesses to corroborate his claims. He further notes that “Darieth, loves the camera and the attention no matter the place, occasion or the moment."

Darieth Chisolm, Mr. X says, wasn’t a victim of cyber rape nor revenge porn. Instead, she was outed on the Internet for knowingly and recklessly transmitting the herpes virus (that she knew she had for over 20 years) and her manipulative ways. Mr. X insists he has grounds to potentially file a civil suit against her as well as pressing criminal charges against Chisolm (Under Jamaica's Offences Against The Person Act) for knowingly transmitting the virus. Section 22 of that Act reads thus: “Whosoever shall unlawfully and maliciously wound or inflict grievous bodily harm upon any other person with or without any weapon or instrument, shall be guilty of a misdemeanor, and being convicted thereof, shall be liable to be imprisoned for a term not exceeding three years.”

Obviously, such a development would be devastating to Chisolm's newfound crusader status (not to mention the funds and the media and public platform that accompany it), even if the charge did not proceed to a court trial or if she was not convicted. This, Mr. X maintains, she absolutely cannot afford to happen, and this is what is driving her civil complaint, and her being featured in high profile news talk show broadcast (“Megyn Kelly Today”) on podcasts and in nationally circulated newspapers. He debunks the civil complaint as "bogus" and notes that it has so far twice been dismissed by the court (July 10, and October 27, 2017).

Mr. X sums up his “ex” as “a female version of Weinstein, Simmons, Lauer, Conyers and many more who have been outed in mainstream media for their manipulative, repulsive and repeated sexual misconduct."  “Darieth,” he adds, “has caused immeasurable and irreversible physical harm as well as psychological pain." He insists that he is the real victim (#MeToo) in this twisted hedonistic saga initiated by Chisolm.

In her desperate need to cover her misdeeds and sullied character in using Mr. X and the island as her own little sexual fantasy paradise, and now being exposed and outed for recklessly and knowingly transmitting a viral infection, "Darieth," he says, "The Detroit Peacock Hustler, has gone to the ends of the earth to present herself as having transited from victim to survivor, to activist and advocate."

The real damage, he states, finally, is to all the legitimate victims of sexual assault and harrassment, who now have to contend with an immoral interloper seeking fame and to line her own pockets from their suffering.