Former Brick and Lace member Nyanda is hoping her current Billboard-charting song On My Way will establish her as a solo artiste. The singer collaborates with French DJ/producer Richard Orlinski on the simmering house track which moves from 41 to 39 in its second week on the Billboard Dance Music Club Songs Chart. 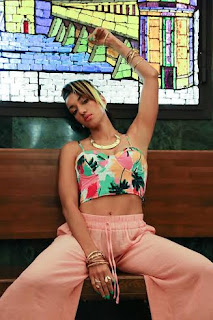 “The song has given me a lot of exposure by penetrating European, African and US markets, which really helps to solidify my brand as a solo artiste,” Nyanda said in an interview with the Jamaica Observer.
She explained how the collaboration with Orlinski came about.

“Richard is an internationally known French sculptor who wanted to fulfil his second lifelong passion to become a DJ. I worked with one of France's biggest producers (Tefa) on different projects before, and when the Orlinski project came around he thought that I would represent on the track. They wanted a female singer with a Jamaican vibe. We linked up in Miami and I wrote and recorded the song at The Hit Factory studio.”
Nyanda, who is based in Fort Lauderdale, said she and her team are determined to see On My Way go further up the charts. They have stepped up promotions with a music video and are reaching out to mainstream radio.

She also has several other projects in the pipeline.
“I have a collaboration with Pit Bull titled Keep You up At Night. There's also Uh Baby with DJ Viper, and there's a Pink Panda remix to Camilla Cabello's No Crying in The Club, which I am featured on,” Nyanda disclosed. “I'm really excited about my joint venture with one of eastern Europe's biggest labels, Cat Music. We're looking to drop some hot singles in the new year.”
Posted by Michael A. D. Edwards at 6:12 AM