IT'S been 17 years since singer JC Lodge took the decision to return to live in the United Kingdom, and six years since she last performed in Jamaica, but she is ready and raring to perform at Rebel Salute at the Richmond Estate in St Ann this weekend. 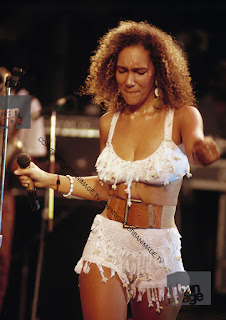 Known for hits including Someone Loves You Honey, More Than Words Can Say, and Telephone Love, Lodge told the Jamaica Observer that the invitation from show promoter Tony Rebel to perform couldn't have come at a more opportune time.

“It is so lovely to be back in Jamaica... it's just a thrill and everybody has been so welcoming. It's all good timing to be here. My time has just become more flexible as I just completed my studies for a degree in teaching and, therefore, any other previous call would have been dependent on my availability. But I'm a lot more flexible now. At Rebel Salute, the patrons can now look forward to a set featuring all the hits; I will also be premiering a new single called Destiny, which is a track from my album Passion Fruit which will be released later this year,” she said.

Lodge, born in England to a Jamaican father and British mother, explained that her decision to return to the UK in 2001 was based on a number of factors, some of which were personal, including that the fact that her father was showing early signs of Alzheimer's disease.

“It was good timing when we went back as I had the opportunity to spend some time with my dad, but in addition, the music scene in Jamaica for me was not as vibrant as it was in the 1980s and 90s. A lot of the major shows and tours were either being discontinued or in transition, so it was the best time to make a change,” she explained.

However, the reggae scene in the UK was not exactly welcoming to her at that time either. She thought she would have made it on to the UK reggae circuit, but found that that too was in transition. So Lodge drew on skills she began to hone just before leaving Jamaica — incorporating music into teaching.
Posted by Michael A. D. Edwards at 8:02 AM