The first set of coaches being provided to Jamaica by the People’s Republic of China for seven sports under a three-year technical agreement signed between the two countries last year, arrived in Kingston yesterday afternoon (January 11). 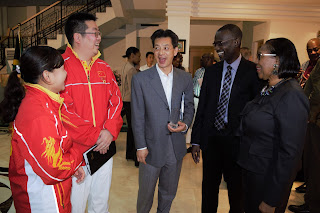 They will be conducting coaching in:
·        Synchronized swimming,
·        Swimming,
·        Basketball for females,
·        Football for females,
·        Volleyball for females,
·        Badminton and
·        Gymnastics.
Speaking on behalf of the Honourable Olivia Grange, Minister of Culture, Gender Entertainment and Sport, Mr Denzil Thorpe, the new Permanent Secretary in the Ministry, told a reception held for the coaches that Jamaica intended to take full advantage of the project knowing that the athletes as well as the coaches and teachers will benefit through transfer of knowledge.
Mr Thorpe told the reception, held at the residence of the Chinese Ambassador, that Jamaica was also grateful for the training equipment to be provided by China under the agreement.

The Permanent Secretary said congratulations were in order for the team that had been working with the Ministry to ensure that this project of technical assistance in sport is indeed a reality. He named the Planning Institute of Jamaica, the Ministry of Foreign Affairs and Foreign Trade, the Sport Development Foundation and the GC Foster College of Sport and Physical Education.
The coaches will spend a month in Jamaica and the agreement also calls for 100 of the athletes in the programme and their local coaches to go to China mid-year.
Posted by Michael A. D. Edwards at 3:58 PM