Among the names of track and field and football stars vying for this year's Jamaica Sportsman of the Year award is the unlikely figure of squash player Chris Binnie. 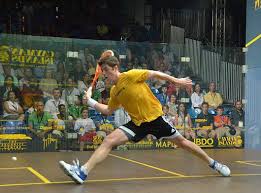 But even though rhe nomination is his first ever, one can argue its well deserved, coming recognition of another banner year for the now 8-time Caribbean chjampion and world-ranked star.

"It's incredible to be nominated with the likes of Bolt and Gayle, among others," Binnie yold journalists on receiving the nom. "It's a very big honour for me; I think I'm the first squash player to be nominated for Sportsman of the Year award. Again, I'm appreciative and humbled to be up there with those other top athletes, and it just means I have had a great year. Whether I win or lose, this gives the sport great exposure. I want more people to get involved."

And given, the tendency of stardom to draw new entrants to a sport, even one still as "marginal" as squash, there should be an uptick in participation this year once greater awareness of Binnie's achievements gets around. Consider, he became the the first Jamaican to compete at the Professional Squash Association World Championship in Manchester, England.

And the professional squash world took notice. Binnie ended the year ranked number 65 according to the World Squash Federation (WSF), the highest ever ranking for a Jamaican.
With his 2017 accomplishments behind him, the goal for Binnie in 2018 is straightforward: He has his sights set on the 2018 Commonwealth Games in Gold Coast, Queensland, Australia April 4-15. He is also eyeing a medal (ideally gold at the Central American and Caribbean Games in July and helping the Jamaica team qualify for the Pan-American Games next year in Peru.
Also, he intends to be at least in striking distance of a Top 50 PSA ranking
Posted by Michael A. D. Edwards at 4:46 AM