This week, the original 1968 Mustang from the action flick “Bullitt” (1968) is on display on National Mustang Day on Tuesday and staying on display through Sunday as part of a weeklong event, sponsored by the Historic Vehicle Association. 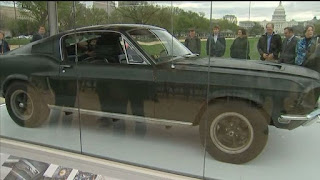 The car was selected to be part of this year’s Cars at the Capital lineup from the Historic Vehicle Association. The Bullitt Mustang is one of only a handful of vehicles to be placed on the National Historic Vehicle Register and recognized as historically significant in the Library of Congress.

“The Mustang is one of the important cars of all time, and this is the most famous Mustang,” said Historic Vehicle Association President Mark Gessler.
The chase sequence the car was used in, involving tire-squealing slides and airborne jumps on the hilly streets of San Francisco, was groundbreaking. “All the chase scenes that you’ve ever seen in a movie after that — are all based on that,” Gessler said.
Two identical 1968 Mustang GT fastbacks were used in the movie, but after filming, the cars went their separate ways.

The “hero vehicle” driven by McQueen was sold by Warner Bros. to a private buyer, while the stunt car — used in many of the jumps during the famous chase scene — was sent to a salvage yard.
That jumper vehicle resurfaced in Baja, California, in early 2017, but the other was thought to be lost to history.
Turns out, Sean Kiernan inherited the car in 2014 from his late father, Robert, who had purchased it in 1974. But it wasn’t until this past January at the North American International Auto Show that the “Bullitt” hero vehicle was finally shown to the world again by the Kiernan family.
Sean Kiernan believes his father bought the car for between $3,000 and $6,000. Rather than keep it as a collector’s item, his parents used it regularly. “They put 46,000 miles on the car,” he said. “It was their daily driver.”
Estimates now put the car’s value at $3 million to $5 million, Gessler said.
Posted by Michael A. D. Edwards at 4:40 AM