Books: Comey "On A High" After Brisk 1st Week 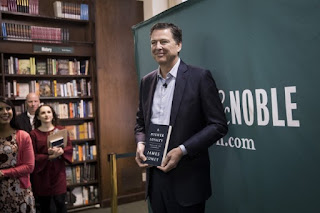 includes print, audio and e-books. The former FBI director’s memoir has been one of the year’s most anticipated releases and includes his accounts of investigating Hillary Clinton’s emails and of his awkward encounters with President Donald Trump.

Reviews have been mostly favorable, with The New York Times calling the book “impassioned” and “absorbing.” And Trump, who has showed a knack for helping publications he despises, tweeted that Comey was an “untruthful slime ball.” Comey, fired by Trump a year ago, has likened the president to a crime boss who values personal loyalty over service to the country.
Published April 17, “A Higher Loyalty” is the hottest political book since Michael Wolff’s million-selling “Fire and Fury,” which came out in January. Its first week sales, which include pre-orders, well exceed those of “Fire and Fury.” But the two books, both published by imprints of Macmillan, had very different launches.
Posted by Michael A. D. Edwards at 5:50 AM