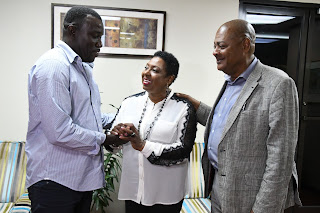 Just when it looked like football coach (and former Reggae Boy) Theodore Whitmore was about to part company with the Jamaica Football Federation, in stepped  Minister of Culture, Gender, Entertainment and Sport  Olivia Babsy Grange to  restore peace and get "Tappa" to rescind his submitted resignation.

At a meeting held at her offices this morning, the two parties were brought together, with the Ministry issuing the following statement after:

1.     Mr. Whitmore would withdraw his recently submitted resignation and continue as Head Coach of the Reggae Boyz,
2.     The Jamaica Football Federation will offer Mr. Whitmore a new contract, and
3.     All issues between Mr. Whitmore and the JFF are now considered settled.

All well and good, but what were the terms? Did Tappa get his asking fee? Did the JFF get him to accept a little less than he asked but still above his original meagre wage?

No one is saying, but our suspicion is that the former is the case. More on this in the coming days we're sure