The North Sea Jazz Festival is set to return at the Ahoy Centre in Rotterdam, Netherlands, on July 13- 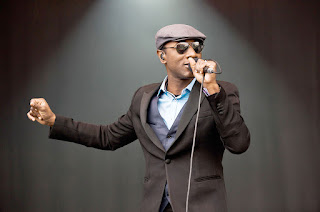 The festival recently announced that hip-hop ensemble The Roots, multi-instrumentalist Anderson .Paak & The Free Nationals, singer and songwriter Aloe Blacc (left), and new-school jazz ensemble Moonchild will be joining previously announced acts such as Chic and Nile Rodgers and Earth Wind & Fire this year.
North Sea will also play host to such artists as saxophonist Nubya Garcia, GoGo Penguin, and BADBADNOTGOOD. Overall, the North Sea Jazz Festival will present this year more than 1000 musicians, spread out over 150 performances across fifteen stages.
For more information, go to https://www.northseajazz.com/en/
Posted by Michael A. D. Edwards at 5:02 AM