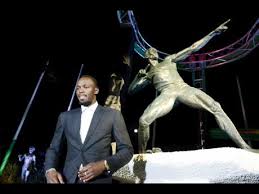 According to reports, the eight-time Olympic gold medallist reached out to Australian chilli farmers late last year in collaboration with Australian supermarket chain Coles to get chilli purees for his sauce.

The launch of Usain Insane Hot Sauces follows on a major contract with the UK-based Casual Dining Restaurants Group to open 15 Tracks & Records restaurants across the United Kingdom over the next five years.

Usain Bolt as a key partner, Tracks and Records started operations on Constant Spring Road in Kingston in April 2011 and has since expanded to Ocho Rios and Montego Bay.
Posted by Michael A. D. Edwards at 4:55 AM