Brands: "Liquor is Coming"; Johnnie Walker Ties Up With HBO

Johnnie Walker just announced that it's partnering with HBO to release a Game of Thrones scotch. 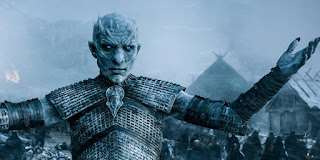 Considering how much boozing goes on in the show — Cersei and Tyrion Lannister being the biggest culprits — GoT-themed booze makes a lot of sense.

It might not surprise you to know there's already a GoT-themed wine made by Vintage Wine Estates and an ale made by Brewery Ommegang, according to Winter is Coming.

Mysteriously, we don't know what will make this whisky different from other Johnnie Walker products. Will it just be cool packaging? Or will it be a new rare scotch to rival the $399 Blue Label Ghost and Rare? Perhaps it's something to honor the White Walkers. Perhaps this Canadian bar that serves frostbitten human toes as garnish was consulted.
Posted by Michael A. D. Edwards at 11:58 AM