Stacey Cunningham, the chief operating officer of the NYSE, is set to become 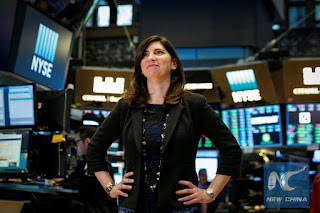 the president of the exchange venue, which is owned by Atlanta-based Intercontinental Exchange. She will be the exchange's first female president since its founding over 200 years ago.


On Friday, Cunningham will replace Tom Farley, who has served as the president of NYSE since 2014. Farley was the second-youngest person to head the exchange. John Tuttle, the head of listings at NYSE, is replacing Cunningham as COO, according to a spokeswoman.
Farley is joining a firm backed by Third Point, the hedge fund founded by Daniel Loeb, according to The Wall Street Journal, which earlier reported the executive shakeup.

"As our COO, Stacey Cunningham successfully managed our equities, equities derivatives and ETF businesses, distinguishing herself as a customer-focused leader who is respected across our industry,” Jeff Sprecher, chief executive of Intercontinental Exchange, said in a statement.
Rivals from Cboe Global Markets and Nasdaq congratulated Cunningham after the news broke.
"Stacey is a fierce competitor, an absolute professional and a profoundly well-qualified executive," said Chris Concannon, president of Cboe Global Markets."I am delighted for her as she steps into this role.”
Cunningham has been with NYSE since 2012. She joined the exchange from cross-town rival Nasdaq.
Notably, Nasdaq named Adena Friedman as its chief executive officer in 2017. That made her the first female to lead a global exchange.
Posted by Michael A. D. Edwards at 4:29 AM