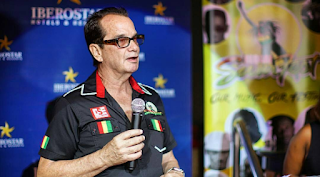 Josef Bogdanovich, CEO of Downsound Entertainment, organisers of Reggae Sumfest. launched yesterday in an evening of flair, gave a typically impassioned speech to go with the captivating performances, all amidst an environment of high energy.

The event, which took place at Usain Bolt's Tracks and Records, was emceed by the vibrant Miss Kitty who remarked about the importance of music and the role it plays in Jamaica’s culture today.

Also speaking at the event was Olivia ‘Babsy’ Grange, Minister of Culture, Gender, Entertainment and Sport, who took a nostalgic trip down memory lane to the genesis of Reggae Sumfest

“This is indeed the greatest reggae festival on earth. I'm proud to see the continuation over the years and the value that it has brought and continues to bring to Jamaica. Before there was Reggae Sumfest there was Reggae Sunsplash and I want to pay tribute to those who gave of their time and effort to make it a reality," she said.

“This year’s line-up is simply awesome. We have expanded the festival to eight days with seven preview and post events and two weekend live stage shows. Last year’s festival was great but this year is even more promising; there’s something for everyone,” stated Bogdanovich.