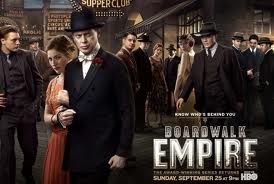 Time was, not that long ago, when the uncompromising dedication to narrative was left to (some) feature films, while television - read network television - followed the path of least offense.

The purveyors of cable TV had a different idea though, and certainly over the last decade, cable channels have surpassed both  their network cousins and much of the feature film world in showing compelling programmes in both comedy and drama. Showtime has "Homeland" AMC has "Mad Men", STARZ has "Spartacus" and Ken Follet's "The Pillars of the Earth" and HBO has, among many others, "Boardwalk Empire".
Prohibition was likely intended as a political solution to a social problem, but its hard to argue with the contention that is created far worse problems than it ever solved. By shifting the supply side form legal to illegal sources without addressing the demand, it aided the growth of mobsterism and corruption, with the attendant ills. Such is the premise of this series, which has gone through two very popular and highly acclaimed seasons. The setting is Atlantic City(which provides the "Boardwalk" of the title), 1920, and the focus is primarily on one Enoch "Nucky" Thompson, nominally city treasurer, but de facto the Big Kahuna; nothing goes down - or up - in the town precincts without him knowing, and collecting on it. from his suite in the Ritz-Carlton he presides over bootlegging, prostitution and a host of illegal and legitimate buisnesses, aided and abetted by his brother Eli, the sheriff, and the city aldermen, his confederates.
But uneasy sits the head that wears the crown, and it will take all the skill and wit he has to manipulate and fend off enemies from without and within.

Medieval England may seem a long thematic jump form Prohibition-era America, but the elements are quite consistent: power, intrigue, lust, violence mistrust - and the desire to build something greater than what has previously been. Ken Follet's blockbuster novel gets the period treatment from Scott brothers, Ridley and Tony, who serve as executive producers, overseeing a cast and crew drawn mostly from Britain, but spanning the Continent. A humble master builder has dreams of building a great cathedral, but to do it, he must outwit some powerful forces with their own outsize agendas.

On the whole, the Boardwalk story is more compelling to watch, but Pillars should hardly be dismissed out of hand. For one, its more restrained. The in-your-face style of "Boardwalk", with its blood-spattered killings, frontal nudity and soft-porn sex scenes can become tiresome with repeated viewings, even though the writing overall redeems each episode. Another important difference is that the 'Pillars" series has a lone director for all the instalments, as opposed to the "revolving door" employed by "Boardwalk" creators Terence Winter, Martin Scorcese and Mark Wahlberg. Not saying there are any obvious aesthetic gaps, but it does jar a little bit.
Such nitpicking aside, both shows make excellent viewing, whether seen as a marathon, or at your leisure. They represent two ways of exploring the issue of man's enduring quest for power and personal aggrandizeement, a fascination that hardly ebbs, and for which cable TV is the ideal medium. 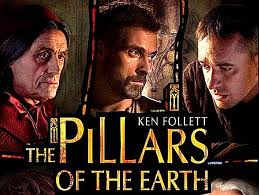