Take a little of Steve Carell's "Office" persona, throw in a contemporary soap opera-type plot, some teen angst, and a little social politics, and you have the basic premise for this mildly entertaining romantic comedy - or more specifically - batch of connected comedic romances. 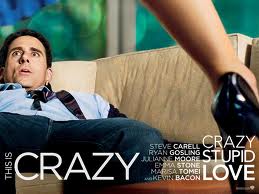 Cal weaver (Carrell) is hit by a divorce demand from his wife (Julianne Moore), the only woman he has ever been with, after 25 years. She's also admitted to infidelity.The implication is that the shock is seismic, but we don't really see that registered on Cal, who even calmly tells of the incident on their return home. it reaches the ears of their babysitter (who, we soon learn, is nursing an intense crush on Cal) and their precocious 13-year old son who is not shy about voicing his own feelings for the babysitter.

But wait - there's more. After blabbing morosely about his misfortune night after night at the local singles bar, Cal falls under the influence of uber-player Jacob (Ryan Gosling, delivering both the look and feel of the role). After a "What Not To wear"-type makeover and some "fieldwork", Cal is unleashed into the surprisingly welcome arms of Kate (Marisa Tomei), a teacher - and not just any teacher, as the film reveals.

Jacob, for his part, has done the near unthinkable: he has fallen, hard, for Hannah, a budding attorney who has just opted out of her own dead-end relationship. This union too, will have some pretty interesting consequences for Cal.

One is not sure what in this film required two directors, but the pair, John Requa and Glen Ficarra, who previously collaborated on "I Love You, Phillip Morris", working from a script by Dan Fogelman (Tangled) do a fairly commendable job, for the film's middle third, at least, of keeping the varied narrative plates spinning. But farce really isn't their strong suit: the denouement feels clumsy, and that, coupled with the less-than-zippy early build-up mean that "Crazy, Stupid Love" is simply a film that one can neither totally denigrate nor recommend, merely tolerate.

Joey Lawrence, former child star (as in "former child" and "former star"), clearly seeks redemption with this lighthearted project. Clearly, its not to be found with this role, which casts him opposite (and mostly subservient to) the curvaceous Shirley Brener as an unabashedly self-centred young woman who creates a list of people she wishes were dead (the "List" of the title)  - those persons having committed the cardinal sin of annoying her to varying degrees (#2 makes it onto  the list merely for ignoring her after an 'anti-climactic' sex bout - pardon the pun).

Enter good ol' Joey, as Lyle, bald, chiseled, sharply dressed and driving a Mercedes coupe. Any girl's dream. our heroine falls utterly without suspicion that Lyle's story of being an "independent contractor" has some major holes. Even when her "enemies" (including  seedy local TV weatherman, and even a dog) start dropping like bowling pins, it takes the better part of the film before even a faint bulb goes off in her gorgeously encased brain.

By that time Lyle, he with all the personality of a cardboard sheet, realizes that his cover is blown (we are never convincingly shown his motive for doing her bidding), and what follows is a ridiculous wedding proposal- kidnapping sequence, where the couple ends up in the abandoned canyon which Lyle has transformed into his personal hitman's graveyard.

What happens next is left for viewing, but if you've sat through this much, you're not likely to care. to be fair, director Minh Collin's style is quite engaging, and as stated, Brener is very easy on the eyes - and charismatic. One hopes their respective talents will be put in the service of better cinematic vehicles...and without Joey.
Posted by Michael A. D. Edwards at 9:49 AM