"How bad is it?" Samuel Jackson's Nick Fury asks ironically, at the beginning of this grand - and gobsmackingly profitable - superhero party.

As it turns out, not too bad at all. Awash in hype, and newly crowned as the opening week box office champ in the US, this superhero comic adaptation definitely struck me as one too many, something to pass on and observe the Hollywood feeding frenzy until the arrival of Christopher Nolan's Dark Knight finisher. 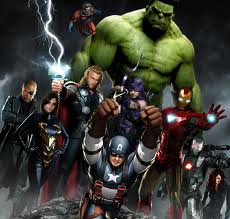 But, give credit where its due, in this case, director and co-writer Joss Whedon has managed to walk the fine and treacherous line between fanboys and critical appraisers. He gets plenty of support form his A-List cast, most notably Robert Downey Jr, who after two previous turns as Iron Man, makes the character indelibly his own here. As with so many good guy-bad guy tussles, the bad guy is generally a better performer. Tom Hiddleston, as the megalomaniac Loki, combines a Shakesperean actor's tongue with the sensibilities of your standard Saturday morning cartoon villain to good effect. The only one-on-ones that fall short of the mark are the ones involving his Asgardian brother Thor (Chris Hemsworth).

The plot? Oh, there's enough of that flying around on the Web and other sources so as to save us the burden of repeating it here. Something about an unbeatable, inexhaustible source of energy and all that. Apart from the repartee, where Whedon's flick really shines is in the efx. A giant aircraft carrier that itself becomes an aircraft; Tony Stark "suiting up" as Iron man while in free fall from high atop his eponymous building; Thor, busting out of  a presumed impenetrable "jail cell" (built alternately for the Hulk and for his brother) while also in free fall. These snippets are undeniably exhilarating, even for the most jaded, and they make the film's final 20 minutes even more regrettable: a by-the-numbers carnival of mayhem and explosions complete with gigantic, super-hideous reptilian alien airships (try saying that 5 times fast!).

Where Whedon, and the cast, is at his best, in the verbal exchanges, whether that between Nick Fury (Jackson brings a kind of "John Singleton hood dad"  sensibility to the role) and the "governing" Council, between Iron Man and Hulk alter-ego Bruce Banner, or between Black Widow (don't get us started on Scarlett Johansen) and Hawkeye (Jeremy Renner)

Neither totally over the top, nor tediously cerebral, The Avengers is a welcome shot in the arm for what had become a tired superhero genre, paving the way for the other summer blockbusters (Batman and Spider-Man) still to come.
Suit up.
Posted by Michael A. D. Edwards at 9:13 AM