It takes a little over half the running time, but this over-earnest film adaptation of Steve Harvey’s best-selling relationship primer – Act Lie A Lady Think Like A man actually becomes moderately enjoyable – right at the point where it ceases to be one long, self-important promo for the book (complete with book signing highlights, video commentary from Harvey himself, and scenes of women battling each other for copies the way they would at a half-off brand name clothing sale). At this point, the relationships move appreciably beyond the “mis-matched types squaring off”  and the guys vs girls scenario to something approaching credible human interaction. 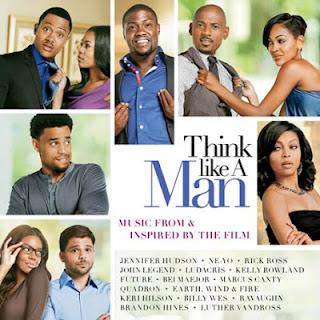 Prior to this, audiences have to suffer through Harvey and director Tim Story’s take on boy-meets-girl, complete with a heavy dose of “Harveyisms” – self-coined terms like “sportfish” or We also have to bear the hamming of …. Whose only purpose in the film seems to be to play the
Most credible of all are Taraji Henson and Michael Ealy. Their love amidst the class struggle affair truly resonates naturally, whether  in the aftermath of lovemaking or in the wake of arguments and break-ups.  Romany Malco and Meagan Good also shine as star-crossed opposites – he the confirmed playa, she consigned “good time girl” looking to step up to something serious,  but anxious to avoid justthe type of guy she’s been presented with.
It would hardly be much of a spoiler to state that all the couples find “happily ever after” before the credits roll. The director and writers …. Tie up the loose ends swifter and surer than a sailor in a storm – the ring is presented; the playa confesses true love and the “mama’s boy” (   ) finally cuts the umbilical cord and makes his single-mom hottie the #1 woman in his life.
The producers were clearly intending “Think Like A Man” as the conventional “chick flick” that the guys can also feel a part of. Ideally, the only way the half-serious  filmgoer can survive it is to see it as a watered down war of the sexes  - with likeable salvos from both sides, but no clear winner.
Posted by Michael A. D. Edwards at 8:17 AM