What does it mean to be Jamaican?
With the 50th anniversary of Independence approaching ever closer and the prospect of another record medal haul at London Olympic Games ever closer to reality, interest in the Jmaaican brand is at an all-time high – and that’s saying something.
But, the question remains…..what defines” Jamaicanness”?  if such a terms can even be used. 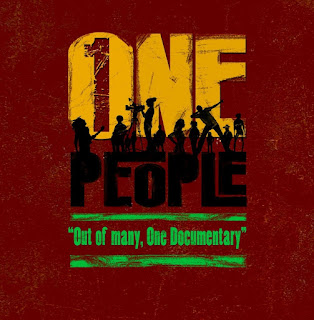 It’s a question that has some hilarious answers, as fans, sponsors, media and well-wishers found out at the sneak preview of the One People documentary, held in Kingston on Tuesday evening at the Sir Phillip Sherlock Centre for the Creative Arts on the University of the West Indies’ Mona Campus.
Those attempting to unearth the answers are Zachary Harding(marketing vet and brother to dancehall super-producer Jeremy Harding), Justine Henzell (daughter of “Harder they Come” visionary Perry Henzell) and with Kevin McDonald, of the recent smash “Marley” docu-film serving as executive producer
The presentation began oddly enough, not with a Jamaican, but with an admitted expatriate, against the expansive vista of southern St Elizabeth, with the broad plain surrendering to high escarpment. Its an ideal summation of the seemingly disparate elements that make up Jamaica and the dynamic characteristics of Jamaicans, who feature prominently in the vox pop-type clips that follow
There was much accountability to corporate sponsors, including National Commercial bank, whose principal owner, billionaire Michael Lee Chin recalled his first job, cutting grass at Port Antonio’s famed Frenchman’s Cove resort.  The producers also approached William Mahfood of beverage makers and brand representatives WISYNCo) and a number of  other corporate titans.
Corporate sponsors Coca-Cola (repped in Jamaica by the WISYNCo Group ) used the opportunity to launch their own Jamaica 50 inntitiative of a younger orientation. Run Di Track is a competition that gives aspiring producers and “riddim-meisters” the opportunity to create the “next hot riddim” utilizing – if necessary – a specially designed mobile recording studio (which was on hand at the preview) that will run the length and breadth of the island to afford access ot those who might be otherwise denied.
The producers know, however, that the greatness of Jamaica lies way beyond the corporate suite, and so the audience heard from a wide spectrum of personalities, including two former prime ministers, athletes and entertainers ranging from Romain Virgo and Sean Paul to producers King Jammys and jack Scorpio. Much use was also humourously of the “Jamaican fabric”: expletives ending with  “claat” (cloth), with artist busy Signal explaining “its just an expression people.”
But of course, there was more august and reflective inputs from the likes of Ret. General Colin Powell, who quipped about the dual pronounciations of his first name (“Coal-lin” and “Caul-lin”) among his American and Anglo-Caribbean compatriots respectively, and Harry Belafonte, who made reference to Jamaican national hero Marcus Garvey, his own mother being a Garveyite.
Still, amid tasty BBQ pig’s tail and tall glasses of Coke,  the  night was about the sounds, looks and prefernces,  ackee and saltfish – itself a meal of dual ethnic identity , is still the dish of choice among Jamaicans across generations. It was really another embattled entertainer Elephant Man (Busy has his own problems with the US Federal Gov’t) ,who added a special Olympic-level dimension to the culinary treat: “Ele” seated comfortably in a studio in contrast to his present surroundings, took the audience mentaly to Central Jamaica, one of the epicentres of yam production and sales. On the famed Millrose Bypass, roast yam, sliced open and slathered with butter, is a perennial favourite. With favourite son Usain Bolt set to defend his Olympic crown in London on August 5, a day before Jamaica’s official Independence anniversary and the scheduled grand premiere of “One People” this could be the revival of the “yam craze” that Bolt initiated with his record-beating runs.
Posted by Michael A. D. Edwards at 7:47 AM