Take a half dozen or so of the “best” of old Britain, throw them together in present-day India, stir gently and you’ll get the heady, sometimes fizzy, yet adorably smooth cocktail that is The Best Exotic Marigold Hotel.
‘A place of character” is how sprightly maitre’d/manager/part owner Sunil (Dev Patel) describes it, and he may well be describing the film as well. Patel is a young man with big dreams. But his reach far exceeds his grasp when it comes to the management of the place, and he has to cope with –what else? – a suffocating mother who of course disapproves of his choice of girlfriend. 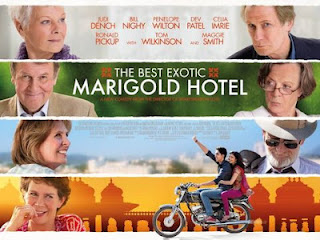 Such clichés can easily be forgiven however, thanks to the fluid direction of Shakespeare in Love’s John Madden and the sterling performances of the entire cast.  Maggie Smith, Dame Judi Dench, Bill Nighy, Tom Wilkinson, Ronald Pickup, Penelope Wilton, Celia Imrie  and a supporting cast of hundreds if not thousands deliver the gamut of emotions with the considerable skill at their collective disposal. What’s more, they’re enjoying it. One imagines that the out-takes from this movie could easily constitute another engrossing film on its own (and I wouldn’t be surprised to see a “Marigold 2” emerge).

Not least remarkable is the great location filming, which exposes modern India in all its contradictory glory. Tuk-tuks careen with methodical mindlessness along city streets, boys play cricket amongst torn-down apartment blocks, and from streetside restaurants, “romantic” Indian music beckons passers-by.
You might not want to live there, but if you’re tired of the usual Hollywood fare, The Best Exotic Marigold Hotel should provide a welcome respite.
Posted by Michael A. D. Edwards at 9:07 PM