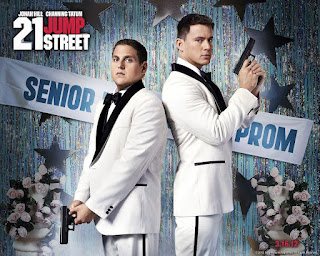 Youth, its said, is wasted on the young.
In this mostly zippy adaptation of the 1980s TV series that launched Johnny Depp into the heartthrob stratosphere, youth is just wasted – mostly on designer amphetamines, but not forgetting copious amounts of beer and other alcoholic beverages.
Co-writers and co-producers Jonah Hill and Channing Tatum are doing extra duty (obviously for a bigger share of the profits) finding time to play the mismatched yet perfectly even bumblers re-assigned to the special Jump Street undercover division where their new commander is none other than Ice Cube. This however, is not the relatively mild-mannered family-man type of “Are We There Yet?” but rather the hard=swearing gruff  of the “Friday” series.
The picture succeeds in spite of its clearly formulaic approach. This is because unlike other models in the  buddy-cop action comedy, genre, it actually moves without coming off as action for action’s sake.
Ironically, the movie only falls flat in the final 20 minutes when Depp himself is introduced in a sort of reprisal of his earlier role.
But by this time, Jump Street has cleared most of the hurdles and is – to borrow a sporting phrase – jogging to the finish line.
Posted by Michael A. D. Edwards at 5:23 PM