Ride For Your Life: Premium Rush

If you're like me and you regard urban cyclists as the bane of modern life, then you probably shouldn't see Premium Rush, as it turns Joseph Gordon-Levitt into some kind of lane-shifting, pedal-pushing Zen hero, albeit a reluctant one. 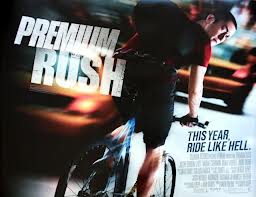 At the film's beginning, we see Levitt, as bike messenger Wilee (after the cartoon coyote) actually get a bit of comeuppance as he is upended while recklessly weaving his way through the New york maze. The film, in the hands of  director and co-writer David Koepp (Mission:Impossible, Panic Room) careens back and forth through the recent past and present to illuminate just what it is that has brought our hero to this particular predicament.

Its actually a coded message on a slip of paper, but in the scheme of things its much more significant than that. Wilee must take from Columbia University Law School on 116th Street to a back alley in Chinatown, his progress of great interest to several disparate elements:  an anxious mother, gangsters in the States and mainland China, and a vicious cop (Michael Shannon, who looks even creepier when he's smiling than when he's pissed off ) with a sizable Mob gambling debt.

Koepp & Co. keep these varied wheels spinning throwing in a problematic love story between Wilee and his female co-worker (Dania Ramirez) and the none too friendly rivalry between himself and male co-worker Manny (Wole Parks) who wants both his job and his girl.

Of ocurse, none of these are truly important. The "money shots" are of Wilee on his "brake-less" bike, instantly sizing up seemingly impossible traffic passes and slotting through gaps that would challenge a human hair. The climactic "chase" involves a hapless NYC bike cop (maybe the messenger firms should give free training to the Police), Shannon in pursuit in his four-wheeled vehicle and sundry other persons.

In the end, it all has only passing interest, like the sight of a cyclist lying prostrate in the roadway after attempting one narrow pass too many. Move along, nothing more to see here.
Posted by Michael A. D. Edwards at 8:20 AM