Just Right for November: The Ides of March 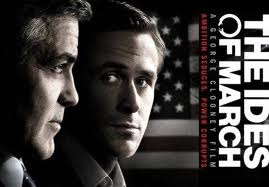 George Clooney made this, his second film dealing specifically with politics in 2011, a critical juncture for both real-life US political combatants as they head toward this year's Decision Day.
Clooney's film is altogether more brutal than The Candidate, which, if only for Redford's presence, retains a core of idealism, as indeed to an even greater extent do Redford's post-Watergate thrillers, All the President's Men and Three Days of the Condor. In fact the informed cynicism that The Ides of March brings to mind is that displayed in Gore Vidal's play and film about a presidential election, The Best Man, when Vidal himself was deeply involved as a Jack Kennedy supporter, as well as his sequence of political novels that began in 1967 with Washington, DC.
Co-scripted by Clooney with Beau Willimon (on whose play Farragut North the film is based) and Grant Heslov (who was Oscar-nominated for Goodnight, and Good Luck), The Ides of March is set largely in Cincinnati where the handsome liberal governor of Pennsylvania, Mike Morris (Clooney), is competing in the Democratic primary elections with his eye on the presidency. It's March, the streets are slushy with melting snow and the air's full of heady rhetoric about the future of America spoken by people with patriotic pins on their left lapels standing in front of outsized Stars and Stripes. A man emerges from the darkness to speak with disarming honesty about his liberal political positions, but he's not Governor Morris, who is in fact a background figure. He's Stephen Meyers (Ryan Gosling), a 30-year-old aide of great brilliance who is using a speech he's written for Morris to test and adjust the acoustics for Morris' public debate with a fellow contender. Gosling subtly suggests something indefinably suspect about his character.

Morris' seasoned campaign manager, the rumpled Paul Zara (Phillip Seymour Hoffman) demands loyalty above all else, but all to give him reassurance that his otherwise unremarkable persona is still relevant.

Clooney's critical point is that nobody's hands are clean. Everyone is fighting for their own turf, either advancing or defending their chosen interests, while outwardly professing loyalty to the cause of the candidate. They frequently end up trapped by their own weaknesses (sex, power, money) rather than being persuaded by superior arguments or circumstances. But is it better to win and deliver on half your pledges or retain your purity and achieve nothing?

The film's "money scene" comes near the end, when ousted campaign manager Zara is called into the Governor’s Chevy Trailblazer, a hulking black hearse, which has backed into an alley in Cincinnati. The conversation is unseen and unheard by the audience who are confronted solely by the vehicle for the duration of the scene until Zara climbs out, and with his fate sealed, lights a cigarette, while the car pulls away.

The Ides of March reconfirms Clooney's directorial gifts, especially his ability to sustain both dramatic tension and moral focus. With a crucial election now pending, and the incumbent Democrat in the fight of his life, this thriller entrant from last year deserves renewed consideration.