"Tomorrow is promised to no one"

that rubric of urgency is repeated throughout this earnest and energetically produced treatised from "Jamericans" Barrivision Limited, who have garnered no small measure of experience in creating features for television and the screen. 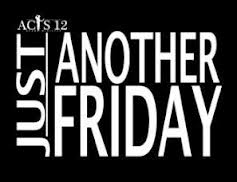 This one is billed as "Jamaica's first gospel movie" and while we can't affirm the claim, neither can we disprove it (a conundrum not unfamiliar to Christian witnesses). The action surrounds a classically dysfunctional Jamaican family, set in the run-up to Easter (hence the title). Mother and Father are virtual strangers - she's overworked; he's "married to the TV". Teen daughter is a recent convert to the faith and has the new convert's overarching - and overbearing - zeal. Late teen son, prefers the "worldian" way of long cellphone convos with a variety of girls and hanging with the upcoming gangsta and remains staunchly skeptical. Into this mix coems family from abroad. Like the first, this couple has a converted daughter, but also a mother and father to boot. Son  stly fun

As an evangelistic piece, 'Friday" works about as well as other pieces in the genre, both foreign ("Fireproof") and local (well....we'll have to check) but as a purely narrative vehicle intended to draw and sustain an audience's attention, it has some....... let's say issues. Some cna be chalked upt ot budget, even though film retains a cinema-worthy look for the most part (one sequence, with noted vocalist AJ Brown singing "Amazing Grace" is a let down). Mainly, the film loses its narrative drive after the "crisis point" - we won't give you the spoiler - and from ther to the end devovles into maudlin territory.

Still, its a worthy "first of its kind" one that brings hope to the genre as a whole and to Jamaican film practitioners and church community in particular.

the film officially premieres at Red Bones this Thursday. go check it, and draw your own conclusions
http://www.justanotherfriday.com/
Posted by Michael A. D. Edwards at 12:35 PM