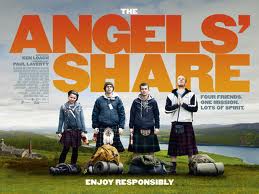 The background of The Angels' Share, his latest collaboration with the leftwing Scottish lawyer turned screenwriter Paul Laverty, is the widespread, seemingly permanent youth unemployment and the despair and communal erosion it engenders. But the realistic and humanistic tone is bracingly optimistic, and it's one of the 75-year-old Loach's more robust films.


The movie begins with a group of criminals brought together by chance in the manner ofThe Usual Suspects and gradually modulates into a heist comedy that combines two classic Scottish films, both directorial debuts from different eras, Alexander Mackendrick's Whisky Galore! (1949) and Bill Forsyth'sThat Sinking Feeling (1980).
The young offenders, played by non-professional actors who perform brilliantly under Loach's sympathetic direction, are introduced at Glasgow's City Court when pleading guilty to a variety of crimes. Their demeanour is playfully contrasted with the solemnity of the bewigged judge, and most of the offences are quite minor – petty theft, defacing public statues, drunkenness in a public place. However, one of the defendants, Robbie (Paul Brannigan), is up for grievous bodily harm, and he's only saved from another custodial sentence because his girlfriend is eight months pregnant.
All of them are given community service and are fortunate to come under the supervision of Harry (John Henshaw, a familiar face from TV drama and the occasional movie), a middle-aged, working-class Mancunian who forges a bond with Robbie.The unemployed Robbie, determined to go straight and be a good father, appears to have everything against him – a history of violence (there's a revealing razor scar on his left cheek) and his girlfriend's brutal father, who's determined to get him out of Glasgow and away on his own, whether by force or bribery. Harry could be his salvation.
Robbie and the companions hear of an extremely valuable old whisky being auctioned at a Highland distillery and plan an ultra lo-tech heist to give them the nest-egg they need. The unwitting participants in their plot are Harry, who has encouraged Robbie's newfound passion, and a sophisticated broker who deals in rare whisky .
The entire cast is excellent but, in addition to those already mentioned, have to give special praise to Gary Maitland as the uncannily canny comic relirf Albert, and the lovely Jasmin Riggins as "to-the-point" kleptomaniac Mo. In the lead role of Robbie, Paul Brannigan mixes rage, hope, self-loathing, swagger and wit as deftly as I've ever seen.
So there is politics underlying every aspect of this funny, warm-hearted, deftly plotted film, and we fervently wish for the caper planned by this endearing quartet to succeed. The film's title, The Angels' Share, refers to the 2% (or so) of whisky that evaporates in the cask each year. An interesting item of distilling lore, it's initially a joke about capitalist exploitation that turns at the end of the film into a metaphor for generosity and gratitude.

**Thanks to David Morrison for allowing me to attend his film screening series. The movies are shown every weekend (Fridays and Saturdays ) at Kingston's Liguanea Club (and sometimes at Red Bones
Posted by Michael A. D. Edwards at 6:19 PM