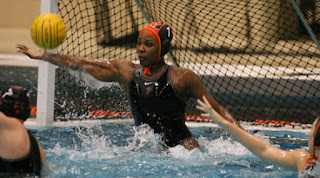 year-old water polo player who is about to make history as the first black woman to play for the United States Olympic team, has Jamaican roots.

The 6 foot 1 inch Ashleigh, who was last month described in an Associated Press report as possessing “jaw-dropping athleticism”, is the daughter of Donna Johnson, a Jamaican nurse who migrated in 1988.
While Ashleigh and her four siblings were not born here [in Jamaica], their mother told the Jamaica Observer that they are very much aware of their Jamaican heritage and visit the island frequently. In fact, the Johnson family was in Jamaica recently visiting the children’s grandfather, Rupert Grey, and aunt, Claudette Morgan.
Posted by Michael A. D. Edwards at 7:16 AM