Usain Bolt: A Showman in search of the Right Show. Michael A. D. Edwards

If you were
A pure bolt of
Fire
Cutting the skies
I'd touch you risking
My life
Not because I'm
brave or
Strong
But because I'm
Fascinated by what the
Outcome
will be
-Nikki Giovanni, Fascinations 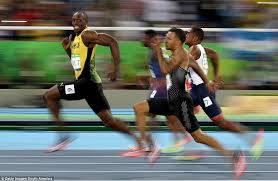 And yet, that knowledge of the certitude of Usain Bolt's ultimate departure from competitive athletics has hardly dimmed the fascination with him and his exploits.

From Beijing to London and Oslo and back to Kingston, Bolt has blazed a fiery trail of invincibility and irresistibility that has drawn and continues to draw millions into his large, radiant aura.
But, with only one more "big ticket" track meet awaiting him by his own admission - the 2017 London World Championships - and the mild taint of scandal (largely manufactured, if we're honest) lingering from his post- glory hijinks in Rio, Bolt is undoubtedly at the proverbial cross roads.
He will no longer have the stadia of the world at his disposal in the manner which he was used to, striding in like a Colossus, with arms raised, finger pressed to lips and the sundry physical and verbal gestures that have in no small part built his now undisputed legend
He may well have the attention of even larger corporate sponsors than he has at present (the Nike rumours persist), and its almost even money that scripts are being fashioned and scrutinized for the Hollywood-type biopic.
But not even such an epic is truly the right vessel to contain an individual of Bolt's record-setting stature. He's not national hero material, as some are proclaiming. But he has unquestionably contributed to the raising of Jamaica's profile globally, and he's done it with great aplomb and - sexcapades notwithstanding - a certain casual wholesomeness that, in drugs-plagued track and field, has lifted the profile of the sport like no other athlete of the era has been able to do. Adoration for him crosses geographic and generational boundaries.
Bolt then, is a born showman in search of a new show.

But not just any show. A figure such as the world has never before seen needs a correspondingly creative format. Not for the gangly and gregarious giant the deceptively easy grab of the analyst's chair; neither the circus-like itinerary of exhibition meets and special appearances.
Bolt himself is prime time, made for the reality series format like no other athlete before him. He needs to carefully consider his posts competitive future, not least because the money, contrary to popular assumption, isn't finite.

The post-Rio scandal will dissipate, but in its wake, he and his handlers must delicately balance the desire to keep him accessible and the very real need to keep him relevant and relatively wholesome; we know he's no angel, but to be perceived ad a mere Playboy would eventually tarnish his legendary status and hurt his income opportunities.

So what then should be Bolt's main focus post-running? Certainly not seeking a place in the first team at his beloved Manchester United. Nor pursuing his proclaimed first love of cricket.
No, Bolt must now be actively engaged in the search for his successor. He must scour the nation and use his money - and others' - in developing sports facilities nationwide. And not just in track and field. Bolt must put his enthusiasm for sports to work in unearthing the next generation of Jamaican sporting talent, and also to bring the world along for the ride: media, prospective investors, Government officials and well-wishers. He will not only visit schools and community centres, but boardrooms and political assemblies here and abroad, making the case and having fun while doing it as only he can.

Can we do it? The truth is, history affirms it, the future demands, and his legacy is definitely in search of it.
He must, and we must, even if only to see the outcome.
Posted by Michael A. D. Edwards at 11:26 PM