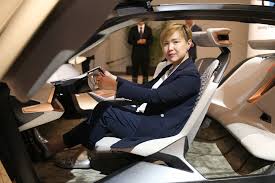 concept for her “rolling sculpture” during a media briefing at her Beijing studio on Thursday, August 25. The 18th BMW Art Car, which is based on the BMW M6 GT3, is set to debut in 2017. Inspired by the speed of racing cars and the tremendous changes of Chinese society over the past decades, Cao Fei will use this installation to interpret the themes of the century such as automated driving and the convergence of virtual worlds and reality.

“The car is key to understanding the changes occurring in contemporary Chinese society. The rapid speed of a car and the rapid changes taking place in Chinese society are my inspirations for creating the 18th BMW Art Car. But my BMW Art Car will adopt an expressive form completely different from previous ones. It will be an interpretation of the century’s theme, namely that we enter ‘a landscape of no man’s land’, e.g. autonomous cars and aircrafts and virtual reality,” said Cao Fei.
Thomas Girst, Head of BMW Group Cultural Engagement, emphasized the heritage and innovations of BMW Art Cars during the media briefing, "Art is a mirror that can reflect the future into today’s reality. The BMW Group believes that sustainability, connectivity and automated driving are the trends for future individual mobility. We are pleased to see that the artists’ ideas for the 18th BMW Art Car regarding future cars, society and humankind is in line with BMW’s vision for future mobility."
Just like previous BMW Art Cars, the 18th vehicle of the collection will participate in a racing event in Asia and furthermore be exhibited in a major museum, making it the latest example of the BMW Group’s endeavor to promote the arts and intercultural communications.
Cao Fei is considered one of the most important young artists to have emerged from China. She has been active in the international art scene for almost two decades with her unique multimedia projects in which she explores the rapid changes occurring in Chinese society today. In November 2015, the jury of the BMW Art Car project, consisting of twelve renowned museum directors and curators, voted unanimously in favor of Cao Fei and American artist John Baldessari to design the 18th and 19th BMW Art Car respectively. The jury is “in particular looking forward as to how she may turn the car into an imaginative part of her parallel universe” as well as present a new perspective to the world.

Absolute creative freedom and full support of the artist
The BMW Group is committed to the pursuit of innovation and creativity. With regards to creating the 18th BMW Art Car, Cao Fei has been guaranteed absolute creative freedom and the full support of BMW.
Cao Fei has also gained a unique insight into the automotive industry. Over the course of the past year, the BMW Group arranged for Cao Fei to have several in-depth meetings with the company’s senior executives. For example, Dr Ian Robertson, member of the Board of Management of BMW AG, discussed the possibility for Cao to be the first artist to also create the inside of a BMW Art Car; Adrian van Hooydonk, Senior Vice President of BMW Group Design, met with her to discuss colors; Karim Habib, Director of BMW Design, spoke to her about 3‑D modeling; and Olaf Kastner, President and CEO of BMW Group, China Region, met with her to discuss BMW’s “Art Factory” in Shenyang.
In addition, BMW gave the Chinese artist a first‑hand taste of speed and state-of-the-art technologies by arranging personalized visits and activities. For instance, the artist marveled at the sight of a number of IT industry experts collaborating with auto designers at the Group’s R&D center. She also was able to see some cutting-edge technologies showcasing human-machine interaction, virtual reality and artificial intelligence, which have already begun to influence the early stages of auto design.

At BMW Group’s plants in Munich and Shenyang, Cao Fei was given a comprehensive overview of the modern auto manufacturing process. She even witnessed the manufacturing of BMW’s latest engine. A young technician from the production line spoke with the artist about the many positive changes the plant has made in his life as well as for the city of Shenyang. The expatriate German experts from the headquarters at Shenyang plant showed Cao Fei how BMW’s “engineer culture” informs every detail of their work.
The communication of these ideas gave Cao Fei a whole new understanding of the design and meaning of cars, which in turn helped her gain a better understanding of the advanced technologies used in the modern car industry. In addition, she gained further insights into the wide range of creative ways informing the shape of future mobility. This interplay of ideas was the source of inspiration for the artist’s many ideas of how to create the 18th BMW Art Car.

History of the BMW Art Cars
The perfect interaction of design, automotive, racing, technology and contemporary art has helped make each BMW Art Car legendary in both the auto industry and the art world. In 1975, together with former Motorsport Director Jochen Neerpasch, the passionate French racecar driver Hervé Poulain came up with the idea to create a canvas on his BMW 3.0 CSL, and commissioned American artist and friend Alexander Calder to paint the first BMW Art Car, thus marking the birth of the collection.
Over the past 41 years, BMW invited seventeen international artists to design BMW models, among them some of the most renowned artists of our time: Alexander Calder (1975), Frank Stella (1976), Roy Lichtenstein (1977), Andy Warhol (1979), Ernst Fuchs (1982), Robert Rauschenberg (1986), Michael Jagamara Nelson (1989), Ken Done (1989), Matazo Kayama (1990), César Manrique (1990), A. R. Penck (1991), Esther Mahlangu (1991), Sandro Chia (1992), David Hockney (1995), Jenny Holzer (1999), Olafur Eliasson (2007), Jeff Koons (2010). Thanks to their creativity, the BMW Art Cars have been a manifestation of minimalism, pop art, art brut and conceptual art – an authentic testimony to the unique trends and cultural ideas of their time.
Moreover, the BMW Art Cars have a long-standing racing tradition, in step with the BMW brand philosophy of “Sheer Driving Pleasure” they combine continuous innovation with speed and art. All BMW Art Cars are “rolling sculptures” built from production models or racecars, and out of those exquisite vehicles so far eight have excelled on the tracks and achieved extraordinary results.
Posted by Michael A. D. Edwards at 2:54 AM