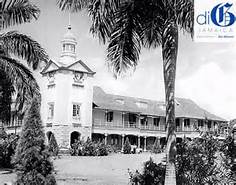 Founded in the immediate aftermath of British West Indian slavery, The Mico University (formerly the Mico
teacher Training College) is, at 180 years, the oldest teacher training institution in the Western Hemisphere.

That said, for it to continue to be relevant, it has to adopt new technology and technology-driven delivery methods. Foremost among these is the building of some 15 "smart classrooms" that when completed, will allow for virtual connections - not only to faclities (Library, Labs, Lecture theatres) on the Kingston campus, but to similar facilities and institutions around the world, many of which have Mico graduates in their midst.

But the project naturally represents a massive investment, and so the Mico Alumni are partnering with the university directorate to raise funds to meet the costs of the ambitious and worthy project.

VETERAN musician Ernie Smith  - who has returned to national prominence via the re-working of his classic Red Stripe Beer campaing featuring the song "Life Is Just for Livin'" is one of the headliners slated to perform at tomorrow’s (November 13) Evening of Musical Excellence at the Jamaica Pegasus hotel in St Andrew.

The organizers aim to raise some $6 million from the event.
Posted by Michael A. D. Edwards at 9:33 AM