Bill Clinton was described as the first "black" President, for the supposed diversity in his appointments. Almost two decades later, the country got a literal "black President" - not just an African-American, but an American-born son of an African man (and white mother). 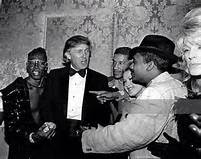 Barack Obama, who remains in office until January, has made an indelible mark upon the office and the world, largely for his adroit political manoeuvring, his unflappable demeanour in the face of stern test (like the 2008 financial meltdown) and outstanding diplomacy.

Obama leaves, as virtually all Presidents do, with a legacy open to questions - with an agenda not nearly as advanced as he would have hoped, with social progress on several fronts, but with a rising tide of racially-motivated violence against blacks by law enforcement and other quarters.

His "successor" already creates history just by his appearance at the White House. Not merely the oldest person (70) ever elected tot he nation's highest office, Trump is also the first to have been elected President without ever holding a previous political office. Barack Obama campaigned - successfully - against a chorus of "inexperience!"when he became Leader of the Free World in 2008, but even he had previously been a Senator.

But Trump's ascendancy brings to Presidential politics a previously inconceivable level of boorishness, an obsession with celebrity, of disdain for establishment, of obsession with money and wealth (and without a corresponding track record of supporting development beyond physical infrastructure), and just a level of personal braggadoccio - including the willingness to settle differences with his fists - that can only be linked with the dancehall genre.

The above image shows then media darling Trump with 90s dancehall legends Shabba Ranks (Grammy winner) and Super Cat (feautred on several pop hit collabs). I don't know the exact date or the provenance, but the image has been making the rounds on social media and struck me as very telling. Donald Trump is happiest when he is in the news and the spotlight is on him. He would undoubtedly prefer favourable coverage, but his media game is now so complete that he was able to swing the torrent of unfavourable reactions to the 2005 outtake from "Access Hollywood" in whgich he boasted, inter alia, of being able to grab women by the pussy (vaginal mound) because of his celebrity status.

In a  Jamaica where such boasts are commonplace, and ingrained in the dancehall canon, the revelation of the Access Hollywood clip undoubtedly further burnished Trump's cult hero status. While rural and suburban poor (Hillary's unfortunate "basket of deplorables") accounted for Trump's victory at the US polls, His Jamaican "base" is solidly urban, working class, less educated and infinitely more materialistic in outlook. Indeed, Trump's closest reference point form the Jamaican perspective in jailed dancehall kingpin Vybz Kartel, whose murder trial attracted international attention. Were the Jamaican political system to create space for Kartel in a manner similar to what the US has created for Trump, the "World Boss" would almost certainly trounce the leaders of the two major political parties - a daunting prospect indeed.

As the US and the rest of the world prepares for the beginning of this chapter of the Trump Era, it will be interesting to see how much of his  tough guy, straight capitalist, "grab 'em by the p---" ethos he retains. Already, in the tense and tumultuous days since his poll victory, Trump has already sounded a more conciliatory tone, one I expect him to keep and refine all the way to the Inauguration.

But once in office, don't be at all surprised to see a return to at least some of the eyebrow-raising words and antics that he used to vanquish some 16 Republican challengers and the entrenched Democratic insider, Hillary Clinton.

If the presidential race can be likened to a DJ (toaster) clash, then Trump, in the words of oyung star Alkaline is the "Champion Boy".

Don't blink over the next four years
Posted by Michael A. D. Edwards at 7:02 PM