Often when bands have a "reunion" its on the back end of an either acrimonious or mystifying break-up. 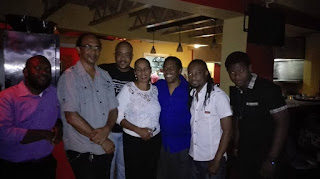 But, while there may have been a definite sense of surprise, there was nothing but joy when bassist Paul "Smiley" Madden and drummer Neison Hardy (the latter now working out of the T.O joined keyboard ace Ozuoune last Wednesday night for the regular - yet never routine "Jazz and Cocktails" session.

The three rekindled memories of heady nights at a another notable Kingston lounge - Christopher's Jazz Cafe - where they had their genesis as P (Paul) O (Ozuoune) and N(Neison) Fyah, with a typically scintillating run.

The current PON Fyah line up -  Carlton Jarrett on bass and a rejuvenated Junior "Bird" Baillie on drums was also on hand, as was drummer Richardo, who spelled Bird while the latter recuperated from illness earlier this year.

The Jam session happens every Wednesday, beginning around 7:30 and going till about 11pm, with recorded favourites before and after.